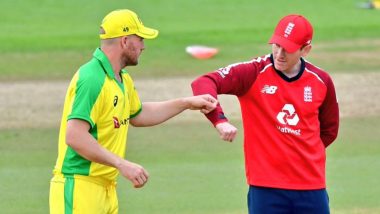 England will hope to take the momentum from their thrilling win the second game when they host Australia in the third and final ODI of the English summer on September 16 (Wednesday). Australia will hope not all is lost after a dramatic collapse when presented with an opportunity to beat England in a series at home for the first time in five years. Both sides will fight for a win that will decide the series and both will certainly hope it’s theirs to win. Meanwhile, England have won the toss and opted to bat first. England vs Australia 3rd ODI 2020 Live Score: Catch ENG vs AUS Cricket Match Updates, Commentary and Live Scorecard.

The visitors have surprisingly not picked Steve Smith for the series decider. Smith missed the opening two ODIs due to a concussion after being struck on the head during the training session before the start of the ODIs. England though have recalled Mark Wood for the third and final match of the series. Wood missed the second ODI due to a slight niggle and replaces Sam Curran in the playing XI. England vs Australia Manchester, Pitch Report & Rain Forecast: Here’s How Weather Will Behave for ENG vs AUS 3rd ODI 2020 at Old Trafford Cricket Ground.

Australia won the first game by 19 runs to take a 1-0 lead in the series. It was a complete team performance from the visitors. They first overcame a top-order batting collapse to post 295 runs on board and then blew England away with a fine bowling spell from Josh Hazlewood. Jonny Bairstow and Sam Billings took the game deep with the later even hitting his maiden century but Australia prevailed.

They looked set for a similar win the second game after restricting England to 232. Once again, Hazlewood was the shining star while Adam Zampa chipped away with some vital wickets in the middle period. Eoin Morgan wad the top-scorer for England but it was Tom Curran and Adil Rashid’s 74-run partnership for the ninth wicket that helped England cross the 200-run mark and post a respectable total. Wood and Rashid joined hands with England reeling at 149-8 and saved the blushes with a great partnership.

Jofra Archer then struck early and removed David Warner for the second successive game. But Marcus Stoinis and Aaron Finch stitched a good stand before Archer sent Stoinis back with a terrific short ball. But Finch found good company in Marnus Labuschagne and the pair looked set to take Australia home before a mighty collapse. England won comfortably in the end leaving Australia with another collapse and another loss.

(The above story first appeared on LatestLY on Sep 16, 2020 05:09 PM IST. For more news and updates on politics, world, sports, entertainment and lifestyle, log on to our website latestly.com).