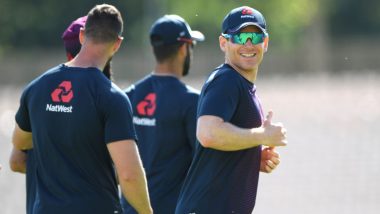 ENG vs IRE Toss Report: England and Ireland face-off in the first of the three-match One-Day International (ODI) series at The Rose Bowl in Southampton. This is the first ODI series following the coronavirus lockdown, which resulted in cancellation and postponement of various series. Meanwhile, England have won the toss and opted to bowl first. Harry Tector and Curtis Campher will be making ODI debut for Ireland. This ODI series like the England vs West Indies Test series will be played in the bio-secure bubble. Interestingly, none of the players who featured in Tests for England against West Indies are part of the ODI squad. England vs Ireland 1st ODI 2020 Live Score Updates.

The series marks the beginning of Cricket World Cup Super League, which will determine participants for the ICC Men's World Cup 2023 to be held in India. So, Ireland will be keen to up a winning show against the World Champions. While Eoin Morgan leads England, Andrew Balbirnie is the captain of Ireland team. Live Cricket Streaming of England vs Ireland 1st ODI 2020 on SonyLiv: Check Live Score Online, Watch Free Telecast of ENG vs IRE Match on Sony SIX.

England comes into series ranked as number one side while Ireland are placed on the 11th spot. England will miss the services of match-winners like Ben Stokes, Joe Root and Jofra Archer but they Moeen Ali, Morgan, Jason Roy and Jonny Bairstow in their ranks.

(The above story first appeared on LatestLY on Jul 30, 2020 06:11 PM IST. For more news and updates on politics, world, sports, entertainment and lifestyle, log on to our website latestly.com).