Royal Challengers Bangalore’s IPL 2020 campaign came to a disappointing halt as they were defeated by Sunrisers Hyderabad in the Eliminator. Yet another disappointing performance from the RCB batsmen proved critical in the game. Virat Kohli himself failed to deliver as after opening the batting, he was dismissed cheaply. 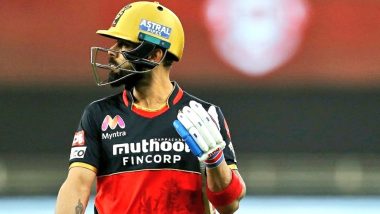 Former Kolkata Knight Riders captain Gautam Gambhir has stated that Virat Kohli must be held accountable as a Royal Challengers Bangalore captain and for not delivering an IPL trophy for the franchise in his eight years of leading the club. Under his captaincy, RCB have made it to the playoffs on three occasions, reaching the finals only once, but are yet to get their hands on the elusive trophy, despite being one of the star-studded teams. Virat Kohli Thanks Fans for Support After RCB’s Six-Wicket Loss Against SRH in IPL 2020 Eliminator.

Royal Challengers Bangalore’s IPL 2020 campaign came to a disappointing halt as they were defeated by Sunrisers Hyderabad in the Eliminator. Yet another disappointing performance from the RCB batsmen proved critical in the game.  Virat Kohli himself failed to deliver as after opening the batting, he was dismissed cheaply. 'Virat Kohli is a Knockouts Choker' Angry Fans Trend #ThankYouKohli on Twitter After RCB Captain Fails To Deliver With the Bat Against SRH in IPL 2020 Eliminator.

Former India cricketer and world cup winner Gautam Gambhir slammed Virat Kohli for not delivering in his potential as an RCB skipper. The former KKR star also compared him to other Indian captains in IPL and their success. ‘Eight years is a long time. It's not that Kohli isn't experienced. He captains India, he captains whichever team he plays for, but you've got to give results, you've got to deliver. Sport is all about delivering.’ Gambhir told ESPNCricinfo.

‘The problem and the accountability starts from the top, not from the management nor the support staff, but from the leader. You're the leader, you're the captain. When you get the credit, you should take the criticism as well.’ Gambhir added.

‘Dhoni has won three [IPL] titles, Rohit Sharma has won four titles, and that's the reason they've captained for such a long time because they've delivered. I'm sure if Rohit Sharma wouldn't have delivered for eight years, he would have been removed as well. There should not be different yardsticks for different people.’ The former KKR skipper added.

Royal Challengers Bangalore, who started the season brightly had a disappointing finish as the lost their last five games in the competition. The Virat Kohli-led team made it into the playoffs on the basis of the net run-rate as they also face defeat in their last game against Delhi which they needed to win to guarantee qualification.

(The above story first appeared on LatestLY on Nov 07, 2020 10:37 AM IST. For more news and updates on politics, world, sports, entertainment and lifestyle, log on to our website latestly.com).