Former England cricketer and coach Graham Thorpe has fallen 'seriously ill' and is receiving treatment in hospital, the Professional Cricketers' Association (PCA) and the player's family confirmed on Tuesday. 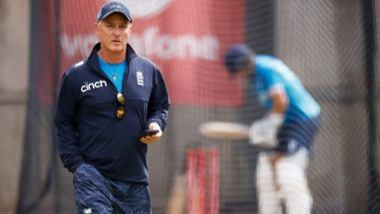 London, May 10: Former England cricketer and coach Graham Thorpe has fallen 'seriously ill' and is receiving treatment in hospital, the Professional Cricketers' Association (PCA) and the player's family confirmed on Tuesday. Thorpe played 100 Tests for England between 1993 and 2005, averaging 44.66 with 16 centuries. The 52-year-old was recently announced as the new head coach of Afghanistan. Cricket South Africa Withdraws Disciplinary Charges Against Mark Boucher.

"Graham Thorpe has recently fallen seriously ill and is currently in hospital receiving treatment. His prognosis is unclear at this stage and we ask for privacy for him and his family at this time. Our thoughts are with Graham and his family," a statement from the PCA, issued at the request of Thorpe's family, read. Thorpe also served as a batting coach for England between 2010 and 2022, stepping down in February 2022 following their 4-0 Ashes defeat by Australia. Rahul Dravid Refutes Reports of him Attending BJP’s Yuva Morcha Meeting in Himachal Pradesh.

"All of our thoughts are with Graham Thorpe and his family. We're with you, Thorpey," England Cricket tweeted. Thorpe's former county Surrey, where he spent the whole of his 17-year first-class career, also wished for Graham's recovery. "The thoughts of everyone at the Club are with Graham, his wife Amanda, and family at this time. He is an icon of the English game, known by millions of cricket fans and forever a favourite son of Surrey CCC," Surrey Cricket Club said in a tweet. Thorpe, who retired in 2005, went on to begin a coaching career in Australia, where he worked with the likes of Steve Smith and David Warner at New South Wales, before joining the England and Wales Cricket Board as a batting coach.

(The above story first appeared on LatestLY on May 10, 2022 07:02 PM IST. For more news and updates on politics, world, sports, entertainment and lifestyle, log on to our website latestly.com).