Batting first, South Africa scored only 108 runs, thanks to a batting brilliance from Keshav Maharaj who scored 41 runs. Arshdeep Singh took three wickets while Deepak Chahar and Harshal Patel scalped two each in this game. 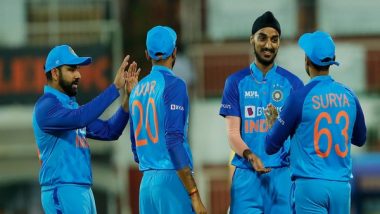 India defeated South Africa by eight wickets in the 1st T20I on September 28 at Greenfield Stadium. The men in blue took a 1-0 lead in the three-match series with this victory. It was a brilliant performance by Rohit Sharma's side in a game where both sides showed how much they want a winning start to the series. KL Rahul and Suryakumar Yadav delivered when the hosts were in danger and took their team over the line with clinical batting performances. Meanwhile, here are some stats from IND vs SA 1st T20I match from Thiruvananthapuram. IND vs SA 1st T20I 2022: KL Rahul, Suryakumar Yadav Score Fifties as India Beat South Africa by Eight Wickets, Take 1-0 Series Lead

Batting first, South Africa scored only 108 runs, thanks to a late batting brilliance from Keshav Maharaj who scored 41 runs. Arshdeep Singh took three wickets while Deepak Chahar and Harshal Patel scalped two each in this game. In reply, after losing Virat Kohli and Rohit Sharma early in the innings, KL Rahul and Suryakumar Yadav took the responsibility to power India to victory. The Indian vice captain hit his 19th T20I fifty while Yadav scored his eighth in the shortest format of cricket to hand India an eight-wicket win.

After clinching 2-1 series win in T20Is against Australia at home a few days ago, India have started their campaign against the Proteas on a winning note. The men in blue would want to win this series as well ahead of the T20 World Cup 2022 which is going to be started later in October.

(The above story first appeared on LatestLY on Sep 28, 2022 11:00 PM IST. For more news and updates on politics, world, sports, entertainment and lifestyle, log on to our website latestly.com).