Stokes was brutally trolled for claiming a catch he had already dropped. The incident occurred at the start of India’s innings. Shubman Gill edged a Stuart Broad delivery to second slip where Stokes was stationed. The England all-rounder claimed but replays suggested the ball may have touched the ground while Stokes was attempting to catch it. 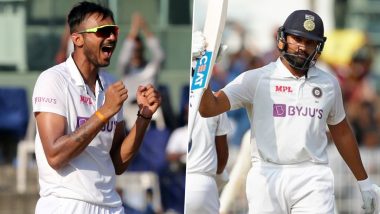 India ended the opening day of the pink-ball Test at the Narendra Modi Stadium in command of the match after bundling England for 112 runs and then finishing day 1 just 13 runs behind with still seven wickets in hand. Rohit Sharma and Ajinkya Rahane were at the crease at stumps with the former batting on 57. India dominated with the ball in hand after England chose to bat first. With this being only the second day-night Test in India, Twitterati had an eventful day with fans reacting to every incident on the field through social media. India vs England Day-Night Test 2021, Day 1 Highlights.

From appreciating Ishant Sharma and Axar Patel to trolling Ben Stokes for claiming a dropped catch, Twitterati was full of reactions from events on the first day of the IND vs ENG pink-ball Test. Fans praised Ishant Sharma for becoming the second pacer from India to appear in 100 Test matches. Axar Patel was also showered with praises after he took a six-for to rattle the visiting side. Axar’s figures of 6/38 is his best in Tests and also his second successive five-wicket haul in Tests matches. Take a look at some reactions.  Virat Kohli Fan Breaches Security at Narendra Modi Stadium To Meet Indian Captain During IND vs ENG Day-Night Test.

Ishant Sharma Given Guard of Honour in His 100th Test

Guard of honour for Ishant in his 100th test pic.twitter.com/hO60Y36L3k

Biggest ground, tallest cricketer: Ishant could not have found a better stadium to play his 100th Test #MoteraCricketStadium

Perfect Start for Ishant Sharma in His 100th Test

In front of his home crowd, take a bow Axar Patel. #IndvEng

Outstanding from Axar Patel. Used the conditions perfectly. And the moment he got one to turn early, his quicker, skiddier ball was going to be the danger.

Stokes was brutally trolled for claiming a catch he had already dropped. The incident occurred at the start of India’s innings. Shubman Gill edged a Stuart Broad delivery to second slip where Stokes was stationed. The England all-rounder claimed the catch and celebrated. But replays suggested the ball may have touched the ground while Stokes was attempting to catch it.

Stokes After Taking a Dropped Catch

Gill was eventually given not-out and the England camp was furious with the decision. Fans trolled Stokes for claiming a dropped catch. He was also later given a warning after he accidentally applied saliva on the ball.

Rohit Sharma in this World Test Championship has been in fantastic form. pic.twitter.com/SfiEnJuYHu

Rohit Sharma is born to open the inning. He's not a middle order batsman be it any format.

Rohit Sharma scored a crucial half-century and was praised by the fans for his knock which helped India get closer to overtaking England’s total. Sharma remained not-out on 57 from 82 deliveries at stumps and will look to make a big score and give India the command of the Test when play begins on the second day of the day-night Test.

(The above story first appeared on LatestLY on Feb 24, 2021 11:04 PM IST. For more news and updates on politics, world, sports, entertainment and lifestyle, log on to our website latestly.com).