Bhuvneshwar Kumar has so far featured in five out of nine matches this Indian Premier League. 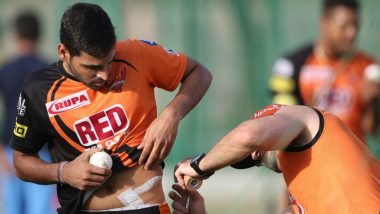 Bhuvneshwar Kumar during a practice session ahead of an IPL 2018 match between SRH and RR (Photo: IANS)

Sunrisers Hyderabad’s (SRH) strike bowler Bhuvneshwar Kumar has so far featured in five out of nine Indian Premier League 2018 (IPL 2018) matches. The fast bowler is not injured, but as a precautionary measure was given a rest. It is believed that the move to give Bhuvneshwar rest comes after the Board of Control for Cricket in India’s (BCCI) request. As per Times of India, BCCI had made a request to Sunrisers team management to use the pacer judiciously. Interestingly, after Bhuvneshwar was not included in the playing XI against Mumbai Indians last month, SRH captain Kane Williamson said that the pacer has a sore back.

Meanwhile, the move to rest Bhuvneshwar makes sense as India have a packed schedule ahead. India’s first overseas assignment after the IPL 2018 is the tour to Ireland and England. After the two T20Is against Ireland in last week of June, India will face England in three-match T20I and ODI series in July. The last leg of India’s England tour features five Test matches, which starts from August 01. Bhuvneshwar is a vital cog of the Indian bowling unit and his fitness will be key for India’s success on the England tour.

In order to keep the fast bowler fresh for England tour, he could well be rested for the one-off historic Test against Afghanistan starting on June 14 in Bengaluru. BCCI is likely to field a second-string side, with the core group of players either traveling to England early or being rested.

SRH are currently on top of the points table are almost certain of their place in the playoffs. It should not be surprising if Bhuvneshwar is omitted from most of the remaining SRH’s matches. it could mainly be to give him the rest. The pacer, in all likelihood, will be back in the playing XI during the all-important playoffs.

(The above story first appeared on LatestLY on May 07, 2018 06:12 PM IST. For more news and updates on politics, world, sports, entertainment and lifestyle, log on to our website latestly.com).