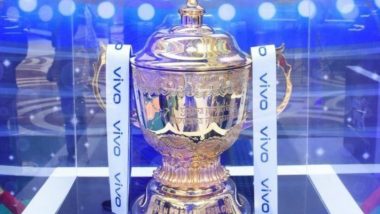 The fate of Indian Premier League (IPL) 2020 has been a hot topic of discussion among the cricket fans in recent times. The Board of Control for Cricket in India (BCCI) are keen to conduct the gala T20 tournament later this year. However, the apex cricket body has been ‘fed up’ of waiting for the announcement of International Cricket Council (ICC) regarding the postponement of T20 World Cup. In fact, BCCI has also reportedly started their planning for the tournament regardless of the decision of ICC. IPL 2020 Update: Twitterati Go Berserk As BCCI Official Says Indian Premier League 13 May Take Place in Sri Lanka or UAE.

As per a report in Times of India, BCCI is drawing up a tentative window for the IPL 2020, irrespective of ICC's call on the T20 World Cup. Treasurer Arun Dhumal confirmed the news as he said that time has come for BCCI to go ahead with their plans. "The year started on a horrible note and there's been no relief on any front. But as time goes by, we need to take things head on and ensure that we remain prepared for any eventuality. Cricket is no different. It is time for the BCCI to start planning for the year ahead," Dhumal told Times of India.

Citing the examples of tournaments like NBA, English Premier League (EPL) and FA Cup, Dhumal said that the cricket bodies have to take baby steps to restart the game.

"The NBA is beginning in the US in a protected zone. The English Premier League (EPL) is on and so are the FA Cup matches. Bundesliga was the first to show the way. Even Australia's domestic rugby league is about to begin. This is what is happening right now. What BCCI is talking about is making plans, even if at the contingency levels, for September onwards," Dhumal added.

Dhumal further took a dig at ICC’s approach by saying that local tournaments are on the front foot to resume action while the major tournaments have taken a backseat. "So, what are we witnessing here? Domestic leagues are in focus while the Olympics and the World Cups are taking a backseat. That's because local leagues don't depend on too many external factors to get going. Revenues are more localised; gate receipts aren't such a huge concern and local leagues can be trimmed and planned to suit particular windows. They're also television-friendly because they can be adjusted to primarily suit local prime time," he added.

The treasurer also added that the postponement of the T20 World Cup is quite certain. However, they are waiting for the decision. "Those announcements and outcomes are not in our hands. The T20 World Cup, for instance, is being postponed so let the announcement come when it has to," Dhumal opined.

(The above story first appeared on LatestLY on Jul 06, 2020 10:08 AM IST. For more news and updates on politics, world, sports, entertainment and lifestyle, log on to our website latestly.com).