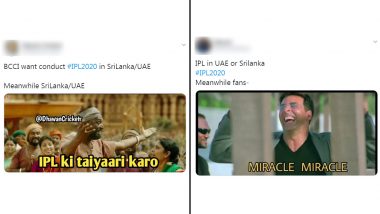 The fate of Indian Premier League (IPL) 2020 has been one of the talking points among cricket fans in recent times. In a recent development, however, a BCCI official stated that the gala tournament could take place in UAE or Sri Lanka owing to the COVID-19 crisis. The official said that the venues of the tournament are yet to be decided. However, in every probability, the tournament will be hosted outside India. Cricket fans went berserk when they came across the latest update as they filled social media with hilarious memes. Below, we’ll have a look at some of those. IPL 2020 Update: Indian Premier League 13 Likely to Be Played in UAE or Sri Lanka, Says BCCI Official.

"We are yet to decide on the venue but in all probability, it is going outside this year. The condition in India doesn't look suited to have so many teams come in at one or two venues and then create an atmosphere which will be safe for the players as well as the general public even though the games may be played behind closed doors,” said a BCCI official while talking to IANS. Well, fans were certainly delighted seeing the high possibility of IPL getting underway. At the same, however, some fans were sad as India will not be able to host the league.

IPL in UAE or Srilanka#IPL2020

BCCI hints that IPL may happen in UAE or Srilanka

IPL 2020 to be conducted in UAE /srilanka

As per the latest plans of BCCI, the tournament is likely to take place in October-November. However, they have to wait for the official confirmation of ICC regarding the postponement of the T20 World Cup in Australia. Well, shifting of the World Cup is quite certain. Hence, every fan is now concerned about the future of IPL 2020.

(The above story first appeared on LatestLY on Jul 02, 2020 07:07 PM IST. For more news and updates on politics, world, sports, entertainment and lifestyle, log on to our website latestly.com).