SRH team management sacked David Warner as captain ahead of their last clash against Rajasthan Royals. They even dropped him from the playing XI in search of a more potent combination. Surprisingly, however, they didn’t bring in Jason Roy as a like-for-like replacement for Warner and included Mohammed Nabi. However, England dasher can make him SRH debut against MI. 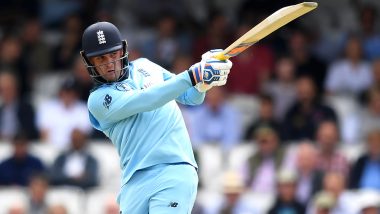 A lot will be on stakes for Sunrisers Hyderabad when they take on Mumbai Indians in their next VIVO Indian Premier League (IPL) 2021 fixture. The crucial encounter takes place at the Arun Jaitley Stadium in Delhi on Tuesday (May 3). With just one win in seven games, the orange army is reeling at the last place in the team standings and are just a couple of defeats away from getting knocked out of the tournament. Hence, they must put their best foot forward against the five-time champions. SRH need to identify their best playing XI to go up in the team standings, and Jason Roy’s inclusion might solve some of their problems.

For the unversed, the SRH team management sacked David Warner as captain ahead of their last clash against Rajasthan Royals. They even dropped him from the playing XI in search of a more potent combination. Surprisingly, however, they didn’t bring in Jason Roy as a like-for-like replacement for Warner and included Mohammed Nabi, with Manish Pandey taking the opener’s slot. However, the combination didn’t prove fruitful as Sanju Samson’s RR walked away with a comprehensive 55-run win. Here’s Why Sacking David Warner as Captain Was a Wrong Decision by SRH Team Management.

Although Pandey, who opened with Jonny Bairstow, scored 31 off 20 balls against the Men in Pink, can he fill Warner’s massive shoes? Well, the 31-year-old is indeed a proven T20 star, but when it comes to opening in white-ball cricket, Jason Roy is miles ahead of him. The England dasher is one of the most destructive openers going around in world cricket, and his record speaks volumes of his prowess.

Moreover, he’s a veteran of eight IPL games and is not entirely alien with the drill of the tournament. Adding on that, he would open with none other than his compatriot Jonny Bairstow and it's needless to mention what the duo has done together. Hence, if Warner is out of SRH’s scheme of things, Roy needs to take the field to give the 2016-champions the best chance of qualifying for the playoffs.

Speaking of what changes SRH can make to induct Roy in the line-up, Mohammed Nabi has to make the way with other foreign players in the line-up, Rashid Khan, Kane Williamson, and Jonny Bairstow cornerstones of the side. In this case, Abhishek Sharma can come in to occupy the all-rounder’s role while Williamson and Manish Pandey need to handle mantle in the middle-order.

(The above story first appeared on LatestLY on May 03, 2021 09:40 PM IST. For more news and updates on politics, world, sports, entertainment and lifestyle, log on to our website latestly.com).