IPL 2022 Final, GT vs RR: Here’s How Rajasthan Royals Made It to the Summit of Indian Premier League 15

Rajasthan Royals were always favourites for the play-off during the league stage, given their tremendous form in the season. RR won a total of nine out of 14 group stage matches and finished second on the points table with 18 points 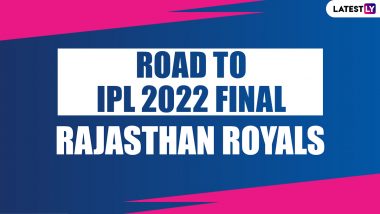 Rajasthan Royals (RR) are confirmed second finalists of the Tata IPL 2022 season after their comfortable win against Royal Challengers Bangalore (RCB) in Qualifier 2 on Friday. RR have already won the title once, in the foundation year of IPL; 2008, under the leadership of the cricketing great Shane Warne and now reached to the finals of IPL 2022 after 14 long years of intermission. RR into the finals of IPL 2022 will be a tribute to their former captain and coach Shane Warne 'The first Royal', who expired earlier in March this year. Rajasthan Royals will engage in the final clash of Tata IPL 2022 up against the Robinhood of the season; Gujarat Titans (GT), who in their first-ever season of IPL prospered as the undisputed kings. The final of the Tata IPL 2022 will be played at Narendra Modi Stadium in Ahmedabad, Gujarat on 29 May 2022, 08:00 PM as per IST. IPL 2022 Final, GT vs RR: Here’s How Gujarat Titans Made It to the Summit of Indian Premier League 15.

Rajasthan Royals were always favourites for the play-off during the league stage, given their tremendous form in the season. RR won a total of nine out of 14 group stage matches and finished second on the points table with 18 points and net run rate of +0.298. Sanju Samson-led team were the third confirmed side for the play-off after Gujarat Titans and Lucknow Super Giants (LSG), when they defeated Chennai Super Kings (CSK) by five wickets in their 12th league stage match on 20 May 2022.

In the knockouts, Qualifier 1 between the top two teams of the season; GT and RR, saw Royals losing to Titans by seven wickets on 24 May 2022, which connoted Rajasthan Royals had to take a long haul to stretch in into the finale while GT made it to the finals. Rajasthan Royals in the Qualifier 2 got everything right and gave Royal Challengers Bangalore (RCB) the push to qualify as the second finalist of the cash-rich Tata IPL 2022. GT vs RR Preview: Likely Playing XIs, Key Battles, Head to Head and Other Things You Need To Know About TATA IPL 2022 Final.

Lost to RCB by 4 wickets

Lost to MI by 5 wickets

Lost to KKR by 7 wickets

Lost to DC by 8 wickets

Lost to GT by 7 wickets

From Rajasthan Royals, most runs have been scored by the Oranage Cap holder of the IPL 2022 Jos Buttler who has 824 runs to his name. Jos Buttler has scored four centuries this season, most hundreds by any batter in IPL 2022. Among the bowlers, Yuzvendra Chahal has most wickets (26) from RR. He lost the purple cap to Wanindu Hasaranga in the Qualifier 2 match between RCB and RR on Friday but is expected to get it back during the final.

(The above story first appeared on LatestLY on May 29, 2022 11:08 AM IST. For more news and updates on politics, world, sports, entertainment and lifestyle, log on to our website latestly.com).