IPL 2022 Final, GT vs RR: Here’s How Gujarat Titans Made It to the Summit of Indian Premier League 15 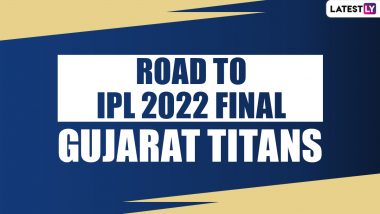 The new kid on the block, Gujarat Titans (GT) was pronounced as the first team to make it to the playoffs and, later, the first finalist of Tata IPL 2022. Gujarat Titans encountered zero roadblocks in their inaugural journey while making way through the finals of IPL 2022 and emerged as the number one team of the season in the league stage with 20 points and continue leading the show in knockouts as the new-comer has already guaranteed its seat to the final. GT vs RR Preview: Likely Playing XIs, Key Battles, Head to Head and Other Things You Need To Know About TATA IPL 2022 Final.

Gujarat Titans Kickstarted their IPL calling opposite the other new-entrant Lucknow Super Giants (LSG) bang on with a win by 5 wickets on 28 March 2022, and after that, there was no going back for the team. GT carried on their winning streak for the initial three matches of the league stage and were humbled for the first time by Sunrisers Hyderabad (SRH) who comfortably chased the set total by GT in 19.1 overs with eight wickets in hand.

After the first hindrance, Gujarat Titans dusted off themselves and stood tall to clinch straight five wins in the group stage before been beaten by PBKS and RCB in their 10th and 11th league match. Until this point, Gujarat Titans had already won eight out of 11 matches in the group stage and secured first place on the points table. Following this, Gujarat Titans had three matches left to play and needed just one win to qualify for the playoffs. It was GT vs LSG which confirmed Gujarat Titans as the first team to get a pass into the knockouts after beating the opponents by 62 runs. Later in the playoff, GT defeated Rajasthan Royals (RR) handsomely by 7 wickets to plunge into the final directly without needing any long routes. All the miniature obstacles seemed insignificant as GT made it to next round. GT vs RR Dream11 Team Prediction IPL 2022: Tips To Pick Best Fantasy Playing XI for Gujarat Titans vs Rajasthan Royals Indian Premier League Season 15 Final.

Lost to SRH by 8 wickets

Lost to MI by 5 runs

Lost to RCB by 8 wickets

(The above story first appeared on LatestLY on May 28, 2022 01:12 PM IST. For more news and updates on politics, world, sports, entertainment and lifestyle, log on to our website latestly.com).