GT vs RR Preview: Likely Playing XIs, Key Battles, Head to Head and Other Things You Need To Know About TATA IPL 2022 Final

The battle between Mohammed Shami and Jos Buttler would be very interesting to watch and could very well define the course of the game. Also, the contest between Hardik Pandya and Yuzvendra Chahal would be something fans will be keen to watch. 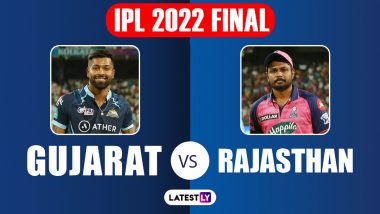 It is final time! After 73 matches, it is down to two teams- Gujarat Titans (GT) and Rajasthan Royals (RR). A newcomer vs a former champion! Apparently Gujarat and Rajasthan finished on first and second place on the IPL 2022 points table and now face-off in the final. While GT qualified for the final after winning the Qualifier 2, RR took a longer route and made it to the summit clash after wining Qualifier 2. Meanwhile, ahead of the GT vs RR IPL 2022 final we take a look at head-to-head record, key players and other match facts. RR vs RCB Stat Highlights, IPL 2022: Jos Buttler Helps Rajasthan Make Final After 14 Years.

Rajasthan Royals have made it to the final of IPL after a gap of 14 years. Back in 2008, under late Shane Warne, Royals lifted its first title and were crowned inaugural IPL champions. The Jaipur-based franchise will be keen to give a fitting tribute to their first captain by winning the title this year. On the other hand, Gujarat Titans will be eager to walk away with the trophy in their debut season.

Gujarat Titans vs Rajasthan Royals have met each other two times. Gujarat Titans leads the head-to-head record with two wins. This apparently is the third meeting between these two sides this year.

For Gujarat Titans, David Miller and Rashid Khan will hold the key to success. For Rajasthan Royals, Jos Buttler and Yuzvenrda Chahal, the Orange and Purple cap holders respectively, will continue to remain the key players. Jos Buttler Hits Fourth Hundred of IPL 2022 As RR Beat RCB to Qualify for Final.

The battle between Mohammed Shami and Jos Buttler would be very interesting to watch and could very well define the course of the game. Also, the contest between Hardik Pandya and Yuzvendra Chahal would be something fans will be keen to watch.

Gujarat Titans vs Rajasthan Royals (GT vs RR) Final match in IPL 2022 will be played at the Narendra Modi Stadium in Ahmedabad on May 29, 2022 (Sunday). The game is scheduled to begin at 08:00 pm IST (Indian Standard Time). Toss will be held at 07:30 pm. It will be the second game of the season at the venue.

(The above story first appeared on LatestLY on May 28, 2022 12:17 PM IST. For more news and updates on politics, world, sports, entertainment and lifestyle, log on to our website latestly.com).