After Rahul Tripathi scored a stroke-filled 76, which laid the foundation for Sunrisers Hyderabad to score a mammoth 193/6 against Mumbai Indians and win by three runs to keep their slender hopes of making IPL 2022 playoffs alive, former India head coach Ravi Shastri claimed that the Maharashtra batter is not far from a call-up to the national team. 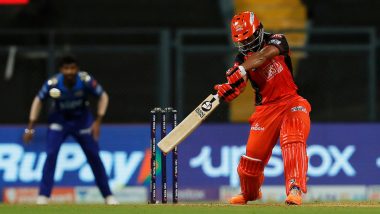 Mumbai, May 18: After Rahul Tripathi scored a stroke-filled 76, which laid the foundation for Sunrisers Hyderabad to score a mammoth 193/6 against Mumbai Indians and win by three runs to keep their slender hopes of making IPL 2022 playoffs alive, former India head coach Ravi Shastri claimed that the Maharashtra batter is not far from a call-up to the national team. Tripathi's wonderful knock of 76 came off just 44 balls, laced with nine boundaries and three sixes at a healthy strike rate of 172.73. MI vs SRH, IPL 2022: Rohit Sharma, Ishan Kishan, Tim David's Innings in Vain As Sunrisers Beat Mumbai by 3 Runs.

"He's not far at all. If someone doesn't get up from the bench or gets up from the wrong side of the bed and gets injured, this guy can be slotted in straightaway. He can go at No. 3 or 4, he's a dangerous player, and should be in the mix. If he's performing season after season, I'm sure the selectors will be watching that very, very closely and giving him his due," said Shastri on T20 Time:Out show on ESPNCricinfo. In this season of IPL 2022, Tripathi has owned the number three spot in Hyderabad's line-up, amassing 393 runs at an average of 39.30 and strike-rate of 161.72, including three half-centuries.

Shastri further heaped praise on Tripathi's fearless all-round game and not being intimidated by opposition's bowling attack. "It's not that one swallow that makes a summer, he's been around for a bit and what I like about his game is his fearlessness, and he's got a tag of being a known quantity and someone the opposition wants to get out quickly. Irrespective of that, he comes out and plays his game and his shot-making ability, the all-round game that he has, he's not overawed by any opposition or by any bowler, which is great to see. MI vs SRH Stat Highlights, IPL 2022: Rahul Tripathi Shines As Sunrisers Hyderabad Remain In Playoffs Contention.

"Tripathi is a very, very confident player. What I liked best was his shot selection, the positions he got in, the anticipation, the reading of the bowler and the lengths he is going to bowl, and then getting into positions to attack a part of the field he wanted to. He gave himself in those positions a couple of options. If the ball was up, he had a couple of shots ready once he got into that position; if the bowler altered, he had plan B in place as well. So extremely impressive and a terrific innings."

Against Mumbai on Tuesday, Tripathi came out at No. 3 after Abhishek Sharma fell in the ninth over and hit the ground running with his usage of conventional as well as reverse sweeps and dispatching pace spearhead Jasprit Bumrah for three boundaries in an enthralling show of batsmanship at the Wankhede Stadium. Shastri went on to explain what makes Tripathi tick at three.

"The thing with Tripathi season after season is whether he has a great or good season, or not a great season by his standards, while he's at the crease the scoreboard is ticking and he's scoring at a great rate, which is tremendous at No. 3 because he sets it up beautifully. If a wicket goes early, he's ready to counterattack." "When you get a good start, he's there to build on that. He doesn't go behind the eight ball, rotates the strike well, he has the big shots up his sleeve and he has a tremendous all-round game. This guy comes with no baggage. He'll come out and play his shots. The time he spends at the crease, he'll be value addition to the (India) side."

(The above story first appeared on LatestLY on May 18, 2022 01:55 PM IST. For more news and updates on politics, world, sports, entertainment and lifestyle, log on to our website latestly.com).