Ireland clinched a shocking win over the Proteas in the second ODI and are in a very good position to win the series, which would boost their chances of qualifying for the 2023 World Cup. 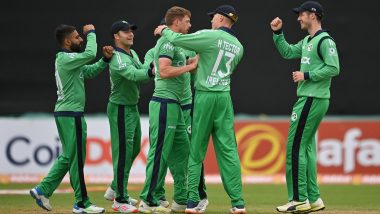 After pulling off a miraculous victory by 43 runs in the second ODI, Ireland would be upbeat about their chances of winning the series when they take on South Africa in the third and last match, on Friday, July 16. The match would start at 03:15 am and would be played at the Malahide Cricket Club in Dublin. Ireland would carry the momentum heading into this match after winning against South Africa for the first time in their ODI history. And they deserved to win as well. They were in control with bat and ball all throughout, despite missing William Porterfield, one of their most experienced and important players. Ireland Beat South Africa for the First Time in ODIs, Register 43-Run Win in Second ODI

Keeping in mind the ICC Super League table, which will determine qualification for the 2023 World Cup, Ireland would be confident and would aim a series win. South Africa on the other hand, would have to bring about a major turnaround in their performance in both facets of the game to improve and play for drawing the series.

The 3rd ODI of the three-match series between Ireland and South Africa will be played at the Malahide Cricket Club in Dublin on July 16, 2021 (Tuesday). The match has a scheduled start time of 03:15 pm IST (Indian Standard Time).

Where To Watch for Ireland vs South Africa, 3rd ODI 2021 Match on TV

Unfortunately, Ireland vs South Africa, 3rd ODI match won’t be available on TV as there are no official broadcasters of the series in India. So, fans won’t be able to watch the live telecast.

However, fans can follow Ireland vs South Africa, 3rd ODI 2021 live action on online platform. FanCode will provide the live streaming the IRE vs SA ODI match online but fans need to pay a nominal fee.

(The above story first appeared on LatestLY on Jul 16, 2021 01:45 PM IST. For more news and updates on politics, world, sports, entertainment and lifestyle, log on to our website latestly.com).