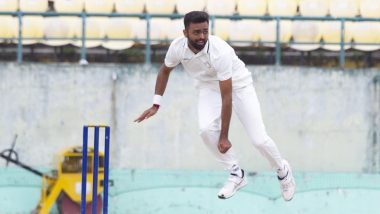 The Board of Control for Cricket in India (BCCI) recently announced India’s squad for ICC World Test Championship against New Zealand and the following Test series against England. While there are some interesting inclusions in the 20-man squad, several notable names missed out. Veteran Saurashtra fast bowler Jaydev Unadkat belongs to the latter category as he wasn’t considered despite delivering stellar performances lately. With 67 wickets in 10 games, the left-arm pacer was the leading wicket-taker in Ranji Trophy 2019-20 as Saurashtra lifted the prestigious title. The 29-year-old would have hoped for a national call-up after such performances, but the selectors ignored him.

Former India pacer Dodda Ganesh was among many who questioned Unadkat’s snub from the Indian Test team. “What else does @JUnadkat need to do to get into the Indian test squad. It’s perplexing to see him being ignored again and again despite great performances year after year at the FC level #ENGvIND,” tweeted Ganesh after the announcement of the Indian squad. Reacting to the post, Unadkat made it clear that he’ll continue to work hard to join the national side. “Your concern motivates me even more! Bring on the next season,” the Rajasthan Royals star responded. India’s Predicted Playing XI for ICC World Test Championship Final: Probable Indian Cricket Team Line-Up for Summit Clash Against New Zealand.

Your concern motivates me even more! Bring on the next season.. 💪🏼🔥

For the unversed, Unadkat made his Test debut against South Africa way back in December 2010. He went wicketless in that game and couldn’t represent India in white-ball cricket again. While he also featured in seven ODIs and 10 T20Is, the fast bowler hasn’t played an international game since March 2018. Moreover, India’s pace battery comprises Ishant Sharma, Mohammed Shami, Jasprit Bumrah and Umesh Yadav, who are proven stars in this format of the game.

Hence, Unadkat really needs to put up exceptional performances regularly to earn a national call-up. Meanwhile, India and New Zealand will play the WTC final at the Ageas Bowl in Southampton. The encounter will get underway on June 18, and both sides would be raring to earn the title.

(The above story first appeared on LatestLY on May 09, 2021 06:21 PM IST. For more news and updates on politics, world, sports, entertainment and lifestyle, log on to our website latestly.com).