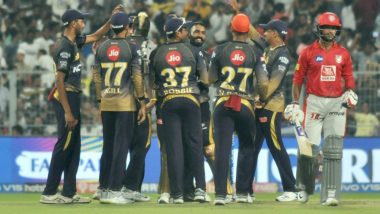 Two-time champions Kolkata Knight Riders (KKR) is one of the Indian Premier League (IPL) franchises that enjoys a huge base. Knight Riders won the IPL 2012 and 2014. Interestingly, the first few matches of IPL 2014 were held in the United Arab Emirates (UAE) and now as the IPL 2020 has been wholly shifted to the Gulf country, Knight Riders will be hoping that the venue proves to be lucky for them. IPL 2020: Andre Russell and Sunil Narine 'Can Fit Anywhere', KKR Posts Pictures of Windies Players Donning Arab Attire; Says 'Coming Soon to UAE'.

Dinesh Karthik is in charge of the Knight Riders. KKR misses out on big names from India cricket with Dinesh Karthik and Kuldeep Yadav being the two lone Indian stars. However, the team has potential match-winners in Nitish Rana, Shubman Gill, Kamlesh Nagarkoti.

Last Season Recap: Kolkata Knight Riders failed to qualify for the playoffs in the IPL 2019 and finished on the fifth spot on the points table. KKR won six out of 14 matches during the league stage.

(The above story first appeared on LatestLY on Aug 09, 2020 04:59 PM IST. For more news and updates on politics, world, sports, entertainment and lifestyle, log on to our website latestly.com).