Interestingly, the opening duo of Tamim and Das shared a mammoth 292-run stand for the first wicket. It is now the third-highest opening partnership in ODIs. 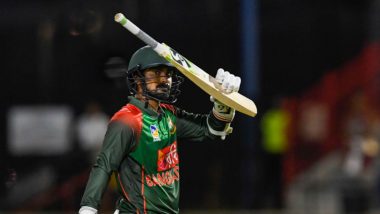 Opening batsman Liton Das smashed 176 runs off 143 balls during the second One-Day International (ODI) between Bangladesh and Zimbabwe at the Sylhet International Cricket Stadium. With this, the 25-year-old broke teammate Tamim Iqbal’s record of highest score by a Bangladesh batsman in ODIs. Tamim scored 158 during the second ODI at the same venue to better his own record, and now after a couple of days, it stands broken. Bangladesh vs Zimbabwe 3rd ODI 2020 Live Score.

Das during his knock smashed 16 fours and eight sixes as he dominated the Zimbabwean bowling attack. Interestingly, the opening duo of Tamim and Das shared a mammoth 292-run stand for the first wicket. It is now the third-highest opening partnership in ODIs. Tamim Iqbal Becomes First Bangladeshi Batsman to Score 7000 ODI Runs, Achieves Feat in BAN vs ZIM 2nd ODI 2020.

After rains intervened, the match was reduced to 43 overs per side. And Bangladesh lost its first wicket in the 41st over of their innings. Das was eventually dismissed off Carl Mumba’s bowling. Tamim, however, went on to carry his bat through and scored unbeaten 128 off 109 balls. This was Tamim’s second century in the series. Bangladesh ended up scorns 322 for three in 43 overs.

Das too scored his second century of the series after his unbeaten 126 in the series opener. Meanwhile, this is Das’ just the third ODI century while Tamim now has 13, the most by a Bangladeshi batsman.

(The above story first appeared on LatestLY on Mar 06, 2020 07:35 PM IST. For more news and updates on politics, world, sports, entertainment and lifestyle, log on to our website latestly.com).