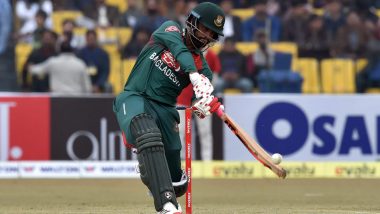 Tamim Iqbal finally ended his lean patch and in the 1st Bangladesh vs Zimbabwe and scored a blistering century at the Sylhet International Cricket Stadium. He breached the 100-run mark after a year and a half in ODIs and also achieved a prestigious landmark in the process. The swashbuckling opener became the first Bangladeshi batsman to scored 7000 ODI runs and is still going strong in the encounter. Iqbal has been one of the cornerstones of Bangladesh batting line-up for over a decade and is still going strong. Bangladesh vs Zimbabwe, Live Cricket Score 2nd ODI Match.

Making his ODI debut way back in 2007, Tamim has represented his national side in 206 ODIs and many are yet to come. This was Iqbal’s 12th century in this format and the batsman also has 47 fifties along with that. Well, these numbers are nothing but sensational by any standards and thus, Iqbal will go down as one of the best batsmen to have donned Bangladesh jersey. Moreover, the batsman was going through a bad run in recent times. Nevertheless, he went back to his vintage mode in this encounter and will aim to guide his team over the line.

Earlier in the match, Mashrafe Mortaza won the toss and decided to bat first on a flat-looking track. Well, the decision didn’t seem to be impeccable at first as the Liton Das and Najmul Hossain Shanto were dismissed for single-digit scores. However, Tamim rose to the occasion and took the game away from Zimbabwe’s grasp. He was very well supported by the veteran pair of Mushfiqur Rahim and Mahmudullah who made significant contributions. As of now, the home side is cruising towards a mammoth first-innings score and are looking all set to win the encounter and seal the three-match series 2-0.

(The above story first appeared on LatestLY on Mar 03, 2020 04:01 PM IST. For more news and updates on politics, world, sports, entertainment and lifestyle, log on to our website latestly.com).