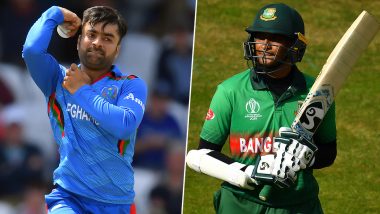 Bangladesh will square off against Afghanistan on Sept 24, 2019. This match will be the final of Bangladesh Tri-Series 2019 which will take place at Shere Bangla National Stadium in Dhaka. Afghanistan team started this tournament as favourites, however with two successive defeats against Zimbabwe and the home side, they have lost their rhythm. Afghanistan was unable to defend the last the target of 140 runs against Bangladesh in their last match as they lost by four wickets. Meanwhile, fans who are looking for live streaming, live score online and live telecast of the match on Hotstar, Star Sports and Gazi TV should scroll down for details. Bangladesh Vs Afghanistan, Cricket Score Final T20 Match.

One of the biggest cause for concern for the Afghanistan team and their fans is all-rounder Rashid Khan's hamstring injury. The 21-year-old Khan pulled his hamstring during the last match against Bangladesh. In the pre-match press conference, he admitted that he can't speak about his availability in the final match.

On the other hand, there is some good news for the Bangladeshi fans as their skipper Shakib Al Hasan is back in form as he scored an unbeaten 70 runs from 45 balls in the previous game, which helped his team secure a comfortable victory. Rashid Khan Uncertain to Play T20I Tri-Nation Series Final.

Where to Watch Live Telecast of Bangladesh vs Afghanistan Final T20I Match?

Star Sports Network is the official broadcaster of the Bangladesh Tri-Series 2019 in India. Fans in Bangladesh can watch the live match of their home team against Afghanistan on Gazi TV. Apart from that BTV and Maasranga TV will also be live telecasting the BAN vs AFG final T20I game.

Where to Watch Online Live Streaming of Bangladesh vs Afghanistan Final T20I Match?

(The above story first appeared on LatestLY on Sep 24, 2019 05:00 PM IST. For more news and updates on politics, world, sports, entertainment and lifestyle, log on to our website latestly.com).