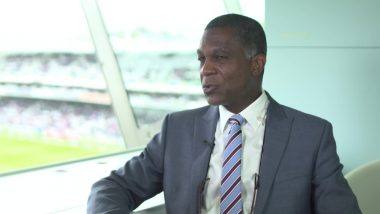 Manchester, September 11: Former West Indies pacer Michael Holding has come down heavily on England and Australia for not taking a knee in support of the 'Black Lives Matter' movement during their ongoing limited-overs series.

"Now that the West Indies team has gone home, that doesn't mean that you still shouldn't be respecting the message and what it stands for," Holding told Sky Sports.

"Yes, (racism) is more acute in the United States than in most other places but people around the entire world took on the mantle of spreading the word and getting this message out that it is time for equality and time for equal justice.

"It was no longer just a black versus white thing...so for Pakistan and England not to then take that signal...neither team did it and the ECB came out with a pretty lame statement, as far as I am concerned," he added. Will Show Our Support to 'Black Lives Matter' Movement in 1st England Test, Says Jason Holder.

England wore "Black Lives Matter" logo on their shirts during their Test series against the West Indies and took the knee to protest against racism, but have not done the same since then in subsequent series against Pakistan and Australia.

Australia skipper Aaron Finch had said before the series that his team would not take the knee because "education is more important than the protest".

"(Finch) is saying that he's glad he is part of a sport where no one is barred from playing, irrespective of your race, your gender, your ethnicity, your religion," Holding said disagreeing with Finch.

"Well, I don't know any sport where anyone is barred from playing because of anything at all. So that's a pretty lame statement.

"I'm not here to try to force people to do what they do not want to do. If you think you do not need to sympathise with and recognise the movement, just say that. Don't come up with lame excuses," he added.

(The above story first appeared on LatestLY on Sep 11, 2020 03:12 PM IST. For more news and updates on politics, world, sports, entertainment and lifestyle, log on to our website latestly.com).