Delhi Capitals now take on defending champions Chennai Super Kings in the Qualifier 2 on May 10, Friday. 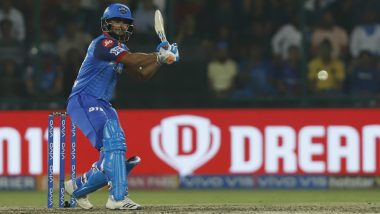 Rishabh Pant once again ignited the debate of his World Cup selection with his superb match-winning knock against Sunrisers Hyderabad in the Indian Premier League 2019 Eliminator. The Delhi Capitals batsman scored 49 off juts 21 balls as he bailed his side out of a difficult situation. Pant’s innings comprised of two fours and five sixes as he turned the tide in favour of Delhi Capitals. Fans Want Rishabh Pant in ICC World Cup 2019 India Squad After His Valuable Cameo Against Sunrisers Hyderabad in IPL 2019 Eliminator.

Delhi Capitals in chase of 163 slumped to 111 for five and at that stage it appeared Sunrisers Hyderabad will emerge victorious. However, Pant backed himself as he counterattacked the SRH bowling. The left-hander smashed Basil Thampi for 21 runs off just five balls and that knocked Sunrisers out of the contest. DC vs SRH IPL 2019 Eliminator Stat Highlights: Rishabh Pant Special Helps Delhi Capitals Set Up Qualifier Clash With CSK.

However, Pant, looking to finish things quickly, was dismissed in the penultimate over and that saw some drama towards the end of DC’s innings. Delhi eventually crossed the line with Keemo Paul hitting the winning runs.

After the game, former England captain Michael Vaughan was surprised that India did not include Pant in the squad for ICC Cricket World Cup 2019. Vaughan questioned the selectors’ choice and reckoned they still have the time to make changes. “How is @RishabPant777 not in the World Cup squad ...... Pretty sure #India still have time to change ........ !!!!!” Vaughan wrote. Rishabh Pant Left Out of Team India for ICC Cricket World Cup 2019, Check Full 15-Man Squad.

Interestingly, it was Kolkata Knight Riders (KKR) skipper Dinesh Karthik who was preferred over Pant as the second wicket-keeper in India’s World Cup squad.

Delhi Capitals now take on defending champions Chennai Super Kings in the Qualifier 2 on May 10, Friday. The winner will take on Mumbai Indians in the final of IPL 2019 on May 12, Sunday

(The above story first appeared on LatestLY on May 09, 2019 01:18 PM IST. For more news and updates on politics, world, sports, entertainment and lifestyle, log on to our website latestly.com).