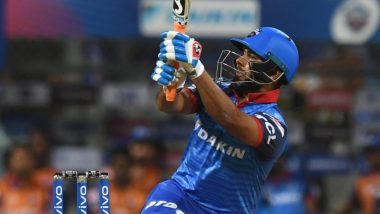 Rishabh Pant scored a breathtaking 49 off just 21 balls that proved to be the difference between Delhi Capitals and Sunrisers Hyderabad. The left handed batsman scored 21 off just 5 balls in the 18th over of Basil Thampi and changed the match on its head. After Rishabh Pant's innings, fans have started making a demand that the Delhi lad should be included in the ICC World Cup 2019 team India squad. DC vs SRH Eliminator Highlights IPL 2019 Match: Keemo Paul Takes Delhi Capitals to Qualifier 2, Sunrisers Hyderabad Knocked Out.

Read the Tweets Below:

I wonder if @BCCI made a mistake by not selecting Rishabh Pant for the upcoming World Cup.

He really does have the X factor. #SRHvDC

I wonder if @BCCI made a mistake by not selecting Rishabh Pant for the upcoming World Cup.

He really does have the X factor. #SRHvDC

Rishabh Pant is making a strong case of his inclusion in the World Cup squad if Kedar Jadhav is unable to recover in time.#VivoIPL

The "3 Dimensional Jibe" Also Came Into the Picture

It’s actually Rishabh Pant who has to order 3D glasses instead of Rayudu to watch Vijay Shankar’s play in the World Cup. 🕶

Though Rishabh Pant brought Delhi Capitals on the brink of victory, he could not finish the match for Delhi Capitals, something that is considered as his Achilles heel. Opening the innings, Prithvi Shaw also scored a brilliant 56 for Delhi Capitals. However, Pant was adjudged as the Man of the Match for his game-changing innings and Delhi Capitals will face MS Dhoni led Chennai Super Kings in Qualifier 2 on May 10, Friday.

(The above story first appeared on LatestLY on May 08, 2019 11:55 PM IST. For more news and updates on politics, world, sports, entertainment and lifestyle, log on to our website latestly.com).