As many as 19 hat-tricks have been taken in the history of the IPL with some bowlers achieving the feat multiple times. This season is expected to witness a similar story with more bowlers adding themselves to the illustrious list of bowlers to have taken IPL hat-tricks. IPL 2021 will begin on April 09 with MI facing RCB in the tournament opener. 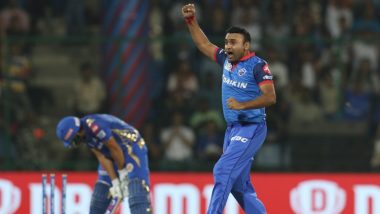 Twenty20 is a batsman’s game. This is a format designed to help the batsman dominate the game with the bowlers left with a very small margin to vary their line and lengths. A little deviation and batsmen can pounce and take them for a ride. But bowlers have always adapted to whatever has been thrown at them. They did in the first two formats and have done so in Twenty20 internationals. A similar story unfolded in the Indian Premier League (IPL). After batsmen initially dominated the tournament, bowlers found a way to adapt and flourish. They have added cherry by taking hat-tricks. Most Ducks in IPL: From Rohit Sharma to Ajinkya Rahane, Five Cricketers Who Have Been Dismissed on Nought Most Number of Times.

IPL 2021 is set to begin on April 09 (Saturday) with defending champions Mumbai Indians facing Royal Challengers Bangalore in the tournament opener. As many as 19 hat-tricks have been taken in the history of the IPL with some bowlers achieving the feat multiple times. This season is expected to witness a similar story with more bowlers adding themselves to the illustrious list of bowlers to have taken IPL hat-tricks. Ahead of the IPL 2021 season, take a look at bowlers with the most hat-tricks in the IPL.  IPL Controversies- Part 5: KKR Removes Sourav Ganguly as Captain in 2009 After Internal Conflict.

IPL and India veteran, Amit Mishra leads the list exclusive list bowlers. Mishra has picked three hat-tricks in the IPL, the most by any bowler in the tournament. He picked his first hat-trick in the inaugural IPL season while playing for Delhi Capitals against Deccan Chargers. Three seasons later, Mishra was playing for Deccan Chargers when he repeated his heroics against Kings XI Punjab. In IPL 2013, Mishra took a hat-trick again this time for Sunrisers Hyderabad against Pune Warriors.

The former India all-rounder took both of his hat-tricks during IPL 2009 when he was playing for Kings XI Punjab. Yuvraj first claimed his hat-trick against Royal Challengers Bangalore and his second against Deccan Chargers. He is the only cricketer to take multiple hat-tricks in a single IPL season.

The South African speedster has played only nine matches in the IPL but has picked seven wickets. His hat-trick came during IPL 2008 when Ntini played for Chennai Super Kings. Ntini claimed his hat-trick against Kolkata Knight Riders.

The right-arm spinner for Rajasthan Royals during IPL 2012. He played 12 matches in the IPL and picked 11 wickets. Chandila claimed his hat-trick in the same season against Pune Warriors India.

(The above story first appeared on LatestLY on Apr 07, 2021 09:50 PM IST. For more news and updates on politics, world, sports, entertainment and lifestyle, log on to our website latestly.com).