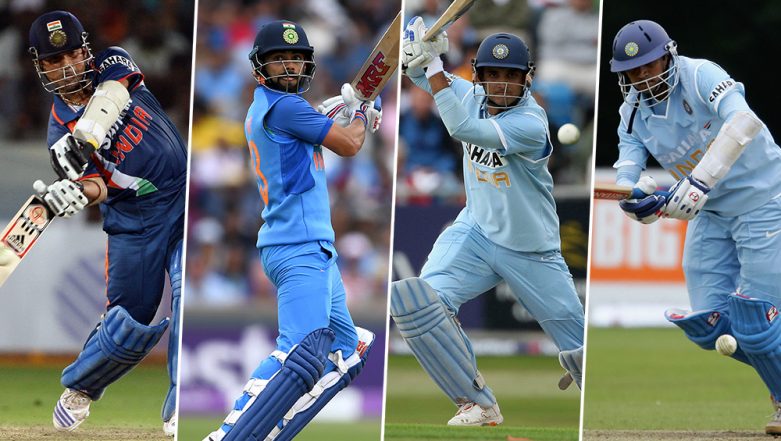 Virat Kohli smashed several records on his way to his 42nd ODI century during the second One-Day international game between India and West Indies at the Queen’s Park Oval in Port of Spain on Sunday. It was Kohli’s 67th overall international century in his cricketing career. From breaking Javed Miandad’s 26-year-old batting record to overtaking Sourav Ganguly and becoming the second-highest run-scorer for India in ODI cricket, the 30-year-old looked to have hit top form at Trinidad and Tobago.  Virat Kohli Batting Records: Indian Skipper Breaks Brian Lara’s 16-Year-Old Record of the Highest ODI Innings by a Captain in West Indies.

Sachin leads the batting charts for most ODI runs scored followed by former Sri Lanka captain Kumar Sangakkara and two-time World Cup-winning skipper Ricky Ponting on second and third respectively. As many as four Indians are in the top 10 for most ODI runs scored with Sachin at the top, while Kohli, Ganguly and Rahul Dravid are placed in the 8th, 9th and 10th position respectively.

Sri Lankan duo Sanath Jayasuriya and Mahela Jayawardene complete the top-five, while Pakistan’s Inzamam-ul-Haq and Jacques Kallis of South Africa are the other two names in the top 10. Former India skipper MS Dhoni (10,773), Chris Gayle (10408) and Brian Lara (10405) of West Indies and Tillakaratne Dilshan (10,290) are the only other players to have crossed the 10,000-run barrier in international cricket.