MS Dhoni, Suresh Raina Announce Retirement From International Cricket: 144 vs England and Other Match-Winning Partnerships by the Legendary Duo 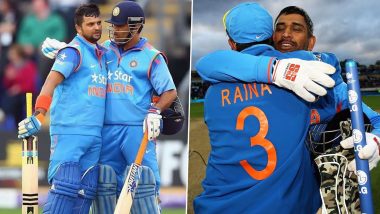 Two of the finest cricketers to have played for India, MS Dhoni and Suresh Raina announced retirement from international cricket and brought curtains to a prolific era. The two batsmen have played together for the majority of their career and there are numerous tales of their friendship. Off the field, they have never hesitated in heaping praises on each other while on the field; they were nothing less than nightmares for the bowling line-ups. With both batting lower down the order, they often batted together and smashed numerous records. Below, we’ll look back at three times when the duo dominated bowlers together. MS Dhoni and Suresh Raina Retirement Funny Memes and Crying Tweets Go Viral.

Dhoni and Raina complimented each other very well which was the main factor behind their stupendous partnerships. They targeted the bowlers strategically which allowed them to accumulate quick runs. Also, with the left-handed and right-handed batting combination in action, bowlers got baffled many times while tackling the two mavericks. Their running between the wickets showcased their camaraderie and they also enjoyed each other’s success. Together, the duo joint forces in 73 ODI innings, accumulating 3585 at a staggering average of 56.9. Without further ado, let’s revisit three of their best partnerships in international cricket. MS Dhoni Retires From International Cricket: Shane Warne Invites the Legendary Wicket-Keeper Batsman for Play for London Spirit.

Dhoni and Raina were at their best during India vs Hong Kong match in Asia Cup 2008. The Men in Blue got off to a brilliant start by Virender Sehwag and Gautam Gambhir but Dhoni and Raina, who came out to bat at four and five respectively, stole the show. They went after the opposition bowlers from the outset and rained boundaries. Both the batsmen went on to score centuries as India posted 374/4 in Karachi and went on to win the game by 256 runs.

Raina was making a comeback during India’s 2014 tour of England. However, he looked in no pressure whatsoever in the second ODI of the series. Former Indian skipper Dhoni complimented him very well as the dup put on an exhibition of great batting. Raina registered a fantastic ton while Dhoni scored a half-century. The two dashing batsmen added 144 runs at Cardiff as India posted 304 while batting first and went on to win the game by 133 runs.

Chasing a target of 288 against Zimbabwe in 2015 World Cup, India were reduced to 92/4 and a great upset was on the cards. Also, the Auckland pitch was favouring the fast bowlers. However, Raina and Dhoni joint forces and since that, it was one-way traffic. The duo just didn’t stabilize the Indian innings but also scored runs at a rapid pace. Raina went on the score a blistering century while the former Indian skipper scored 85 runs. Both the batsmen remained unbeaten at the end as the Men in Blue won the game by six wickets.

The two batting greats might have bided adieu to international cricket but they’ll continue to play for Chennai Super Kings (CSK) in Indian Premier League (IPL). The tournament will get underway on September 19 in UAE and it will be interesting to see whether the Men in Yellow will lift their fourth IPL title or not.

(The above story first appeared on LatestLY on Aug 15, 2020 10:33 PM IST. For more news and updates on politics, world, sports, entertainment and lifestyle, log on to our website latestly.com).