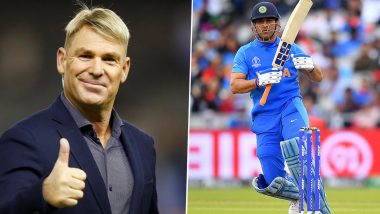 One of the greatest cricketers to have ever stepped onto the cricket field, MS Dhoni announced retirement from international cricket. The former Indian captain took to Instagram and made the major revelation. Twitterati went in frenzy after coming across the news and paid tribute to the legendary wicket-keeper batsman. However, when former Australian leg-spinner Shane Warne came across the news, he asked the Ranchi-born cricketer to play for London Spirit in the inaugural edition of The Hundred in 2021. Well, Dhoni is likely to continue playing in Indian Premier League (IPL) as he has retired only from international cricket. However, it’ll be interesting to see if he’ll accept Warne’s offer or not. MS Dhoni Retires: Amit Shah, Sachin Pilot, Shashi Tharoor, Smriti Irani and Other Politicians React to Ex-Indian Captain's Exit.

Just like the name suggests, the Hundred is a 100-ball competition which will see eight teams competing. Warne is the head coach of London Spirit is eyeing the services of the talismanic wicket-keeper batsman. “Okay MS! If you will like to continue to play outside IPL, would you like to play for the London Spirit at Lord’s next year in The Hundred,” said Warne on a Sky Sports’ show. MS Dhoni Announces Retirement from International Cricket, Likely to Continue Playing in IPL.

However, Wasim Akram pulled Warne’s leg by asking if he’ll be able to pay to afford Dhoni. “Well Warney, if I was MS Dhoni, I would be asking: ‘How much budget do you have” Nevertheless, the former Aussie bowler made his intentions crystal clear by saying: “I’ll find the money.”

Fancy it, MS? 🏏@ShaneWarne makes an on-air plea to MS Dhoni to come and join London Spirit in the Hundred next year 🙏 pic.twitter.com/wSughElbex

Along with Dhoni, his partner-in-crime Suresh Raina also bided adieu to international cricket. Nevertheless, the duo will be seen in action for Chennai Super Kings (CSK) in Indian Premier League (IPL) 2020 which will get underway on September 19 in UAE.

(The above story first appeared on LatestLY on Aug 15, 2020 09:39 PM IST. For more news and updates on politics, world, sports, entertainment and lifestyle, log on to our website latestly.com).