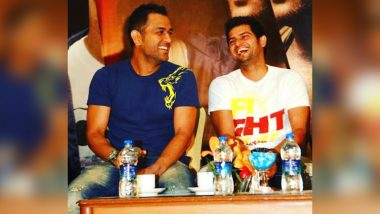 MS Dhoni and Suresh Raina announced their retirement from international cricket on August 15, 2020 (Saturday). Both players were an important part of India’s golden generation which in nearly three decades brought World Cup glory to the country following their triumph at the 2011 Cricket World Cup. So as two of the greats of the game hung up their boots, netizens bid adieu to the legends in their own way. MS Dhoni Announces Retirement at 39: Trophies Won by Team India Under the Ranchi-Born Cricketer's Captaincy.

MS Dhoni took to his Instagram to announce his retirement and soon after, his compatriot Suresh Raina announced his decision as well. Social media was flooded as fans of cricket started congratulating the two on their illustrious career and thanked them for their contribution to the national team. Here is how the netizens reacted. Suresh Raina Announces Retirement at 33: Best Knocks By the Swashbuckling Indian Cricketer.

Raina A Great Finisher And A Great Friend. ❤️#DhoniRetires#rainaretires pic.twitter.com/2gh93PLF6C

I want to wish a very happy retirement to MS Dhoni and Suresh Raina. Both World Cup Winners, and should be counted amongst the legends of Indian Cricket.

Despite MS Dhoni and Suresh Raina’s international retirement, the duo will take part in the upcoming edition of the Indian Premier League when they will take the field for Chennai Super Kings. IPL 2020 is set to kick off from September onwards in the United Arab Emirates after the governing council have received official permission from the Indian government.

(The above story first appeared on LatestLY on Aug 15, 2020 09:26 PM IST. For more news and updates on politics, world, sports, entertainment and lifestyle, log on to our website latestly.com).