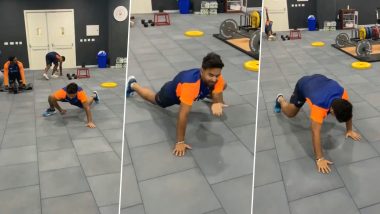 Rishabh Pant is really fond of Spiderman. The Indian wicket-keeper batsman had earlier sung the Hindi version of the Spiderman theme song and on February 19 (Friday), he was seen imitating the Spiderman’s movement during the India national team’s workout session. Pant has been in sensational form of late both in front and behind the stumps. The 23-year-old scored a brilliant 91-run knock in the first Test and followed it another half-century in the second Test on a tricky wicket. Virat Kohli Gives Fans Fitness Goals in His Latest Instagram Post, India Skipper Shares Pics From His Gym Session.

Pant’s national teammate Washington Sundar shared a video of the wicket-keeper batsman doing the Spidey walk during the team’s gym in Ahmedabad. “Spiderman Spiderman” Sundar captioned the video. In the clip, Pant can be seen trying the Spiderman climb on the gym floor.  Take a look at the video from Sundar. Hardik Pandya Mesmerised by Beautiful View of Motera Stadium, Says ‘It Feels Surreal’ After Stepping Into the 1 Lakh Sitter (See Post).

Rishabh Pant Does The Spiderman Climb

Pant and Sundar, meanwhile, will be part of the IND vs ENG pink-ball Test match at Ahmedabad starting from February 24 (Wednesday). The day-night Test match will be played at the recently renovated Motera Stadium, which is now the largest cricket stadium in the world and has a capacity of over 1 lakh.

(The above story first appeared on LatestLY on Feb 20, 2021 12:06 AM IST. For more news and updates on politics, world, sports, entertainment and lifestyle, log on to our website latestly.com).