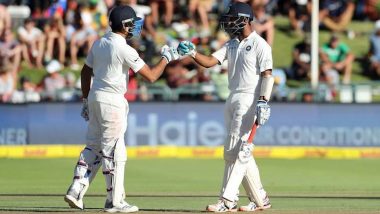 Veteran Indian batsman Rohit Sharma might have established himself as an opener in the longest format of the game. Before that, however, the Mumbai-born cricketer had played some decent knocks while batting in the middle order too. In a recent interaction, Cheteshwar Pujara recalled how Rohit’s aggressive knock put India on the driver’s seat during the 1st Test against Australia at Adelaide in 2018. Batting first, the visitors were reeling at 41/4 with the likes of Ajinkya Rahane and Virat Kohli back in the hut. Nevertheless, Pujara joined forces with Rohit and the duo helped India recover from the early blows. Sarfaraz Ahmed Gives His Take on Virat Kohli vs Rohit Sharma Debate.

Recalling their 45-run stand for the fifth wicket, Pujara said: “When I spoke to Rohit when he came in to bat, he told me that he’s going to take them on. So that was his plan, which was correct at that stage because they were bowling in good areas and he was very confident that he could go after them. So I said ‘sure, you stick to that’. I was there at the other end, I was leaving the ball well, growing in confidence,” Pujara told Arjun Pandit on the Sony Ten Pitstop Show. Rohit Sharma Trolls Netizen Who Asked Him to Describe Virat Kohli in One Word (See Post).

With the help of two boundaries and three sixes, Rohit scored 37 runs off 61 deliveries before falling prey to off-spinner Nathan Lyon. By the time of dismissal, Pujara got his feet settled through which he went on to score a sensational century. Riding on his effort, India posted 250 runs in the first innings which proved to be fruitful as the visitors went on to win the game by 31 runs and took a 1-0 lead in the four-match series which they eventually won by 31 runs.

“Our game plan was working at that stage. Things were going well. Rohit started hitting boundaries and sixes and then ultimately we thought that anything about 200-250 would be decent on that pitch because there was enough in it,” Pujara added.

“We knew our fast bowlers were really strong and we had a very good line-up. So, the main aim was to put up a good partnership and get a decent score on the board. We were successful in that. After that Ash came in, there was a little bit of partnership with him too. After that, the tail-enders came in so I knew I had to take a leading role. I’ll have to play my shots and take them on. But I could do that because I knew how the pitch was behaving and what areas they’re trying to bowl,” he concluded.

(The above story first appeared on LatestLY on Jun 20, 2020 09:28 AM IST. For more news and updates on politics, world, sports, entertainment and lifestyle, log on to our website latestly.com).