Rohit Sharma Is on a Different Planet When He Gets Going: KL Rahul After India’s Win Against Bangladesh in CWC 2019 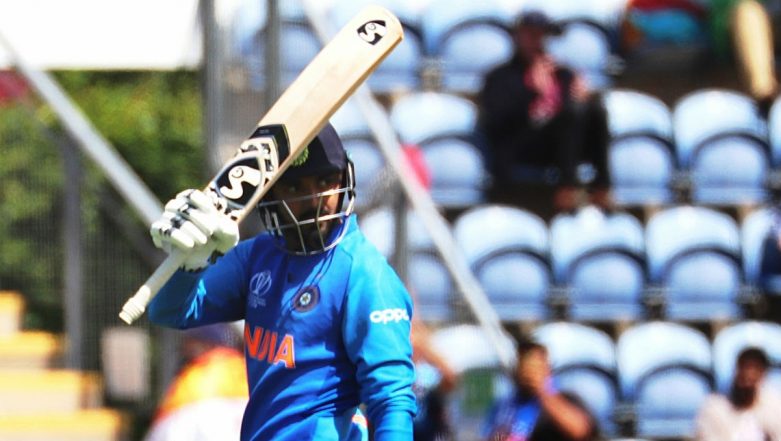 Birmingham, July 3: On his day, India vice-captain Rohit Sharma makes batting look easier than a walk in the park and with four centuries to his name, the 2019 edition of the World Cup has seen him in fine flow. But his opening partner K.L. Rahul says that looking to emulate the stylish batsman would be nothing short of being foolish."You would be a fool to be tempted to bat like Rohit because he is in a different class. India vs Bangladesh Highlights of ICC World Cup 2019 Match: IND Qualify for Semi-Finals, BAN Knocked Out.

He is on a different planet altogether when he gets going. He made it look really easy (against Bangladesh) when really it wasn't anything of the kind. The pitch was two-paced, up and down, not coming on to the bat, but from the way he played you would not have known."We expect it from him and he is delivering it every time. To bat with him is really easy because he takes the pressure off you. He keeps getting the boundaries and the scoreboard keeps ticking, I just have to keep there with him. It is great fun. Rohit Sharma Gifts Signed Hat to Team India Fan Hit by His Shot During India vs Bangladesh ICC Cricket World Cup 2019 Match (See Pics).

"He has scored the most runs for the team, but everyone else has chipped in and we have talked about that as a team, to keep the contributions coming from the middle order and at the death," Rahul explained. Commenting on his own form, Rahul said: "Personally, I feel I have been going well, but am not fully satisfied as I haven't carried on after some of the starts. When I say 'convert', I mean getting to, say, 35 or 45 overs as often as I can because in these conditions it is the set batsmen who can do the most damage."

The Men in Blue have now qualified for the semis and Rahul said that the boys did enjoy a bit of a party in the dressing room after the win over Bangladesh at the Edgbaston Cricket Ground."We did enjoy a bit of a celebration after the game," he said. "We are two steps away from winning the trophy and that has been a dream we have worked towards for the past four years."We put in a clinical performance, we batted and bowled well, and we have this winning momentum. Now we have to make sure we keep our heads up and our eyes on what is happening."