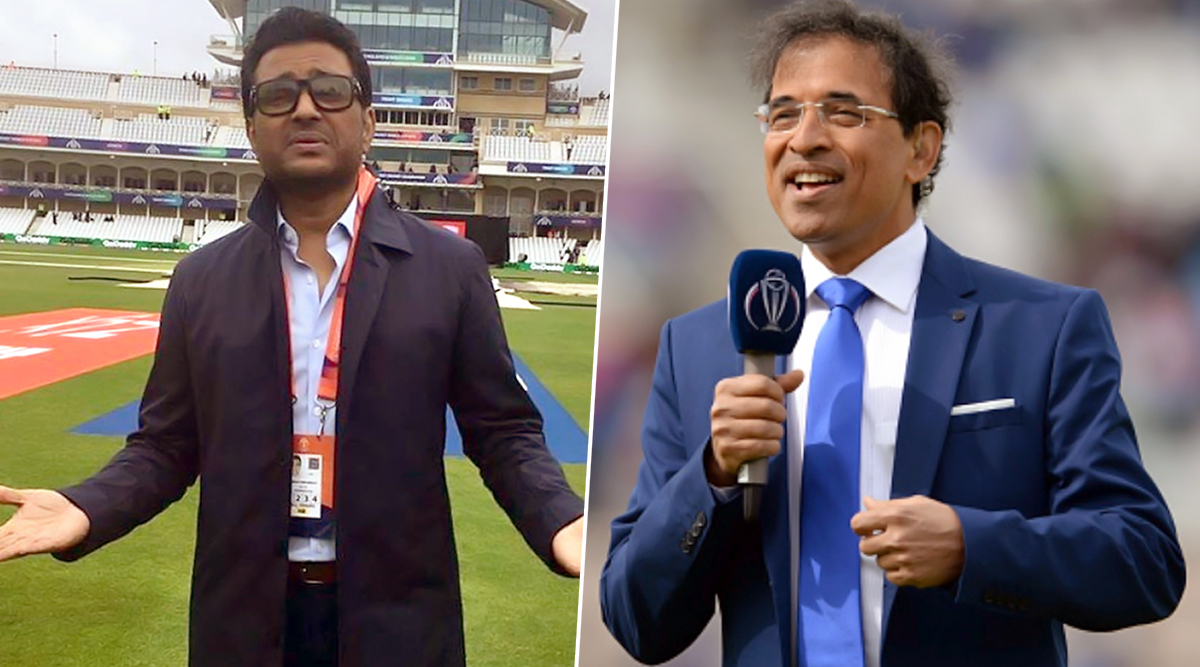 Many cricket experts and pundits have presented their different opinions on the pink-ball. Some consider it as a future of Test cricket while others have questioned its visibility. Sanjay Manjrekar and Harsha Bhogle also had different thoughts on cricket’s latest endeavor and they got involved in a heated argument during India vs Bangladesh day-night Test. While sharing the commentary box in one of the sessions, both the experts presented their different views and the spat went to such an extent where Manjrekar said that his thoughts are more relevant as he has played the game. Well, his statement didn’t amuse the netizens who bashed him left, right and center.  India vs Bangladesh Day-Night Test: Umesh Yadav's Five-fer Completes Formalities As Virat Kohli and Team Win Pink-Ball Test by an Innings and 46 Runs, Clinch Series 2–0.

Bhogle questioned the visibility of the pink-ball as many batsmen were not able to pick the bouncers and got stuck in the helmet. He said that ‘when the post-mortem of the match will be done, the visibility of the pink ball will be the main issue. However, Cricketer-turned-commentator Sanjay Manjrekar had different thoughts on the topic and said that theirs is no such problem as the slip-fielders have taken some great catches. To which, Bhogle replied that the players should be asked about the same. In reply, Manjrekar reminded his fellow commentator about his cricket career and said that ‘you need to ask someone like us who have played the game ’. The 54-year old was criticized by the cricket fans and here is how they reached. Sanjay Manjrekar Posts Sarcastic 'Bits And Pieces' Tweet On End of ICC Cricket World Cup 2019, Twitterati Hilariously Troll the Indian Commentator.

Harsha bhogle and Sanjay manjrekar having a difference of opinion on live tv pic.twitter.com/0TTSLQDCvO

Like where does #Manjrekar get all this shitty arrogance from? As a "player", which he keeps harping on, he was inconsequential at best and forgettable at worst! Never came across a person who's so endlessly proud of his own mediocrity #INDvsBAN

The best commentators are not necessarily cricketers. Arlott wasn't, Alston wasn't@bhogleharsha is not. But he's the best Indian commentator. Whereas, #Manjrekar comes across as mediocre, smug in his limited window of time, disinclined to learn. Totally unnecessary comments. https://t.co/by7aLgk05W

It is this incredible smugness that makes #SanjayManjrekar the worst possible broadcaster in the history of the game. Unreal arrogance combined with a total ignorance about his own pathetic quality as a commentator.

A public apology to #Harshabhogle is the least he can do. https://t.co/m5hAnceFAa

This is boorish and absolutely unnecessary from @sanjaymanjrekar. Pity. What does it cost to be civil to a fellow commentator who was asking a very valid question? "You need to ask." Really. https://t.co/M7uhsyFpgD

Well, Controversy and Manjrekar go hand in hand. Who can forget his ugly spat with Ravindra Jadeja when he called the Indian all-rounder ‘a bits and pieces cricketer?’ Since then, the former batsman has become a victim of trolls many times and his claim in the historic clash didn’t get a different response either. Talking about the match, India put up a phenomenal performance and clinched the clash by an innings and 46 runs. They were also the winner of the first clash and hence seal the series 2-0.