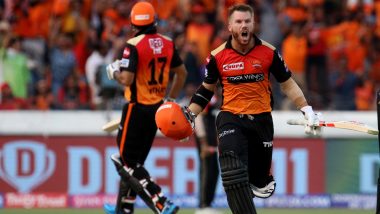 Sunrisers Hyderabad (SRH) cross swords with Kolkata Knight Riders (KKR) as the two sides kickstart their VIVO Indian Premier League (IPL) 2021 campaign last season. The encounter takes place at the MA Chidambaram Stadium in Chennai on Sunday (April 11). In the last few seasons, there hasn’t been much difference in the journey of the two sides and it would be interesting to see who comes on top in the season opener. David Warner’s SRH finished at number three last season and would like to get a couple of steps in IPL 2021. On the other hand, Eoin Morgan would be determined to take KKR to their third title. SRH vs KKR Preview: Likely Playing XIs, Key Battles, Head to Head and Other Things You Need to Know About VIVO IPL 2021 Match 3.

Meanwhile, Dream11 fans should continue reading to find out who can be your best pick as captain and vice-captain while you select your fantasy team for this game. Notably, the selection of captain and vice-captain is crucial when it comes to earning rewards in Dream11. Captain fetches you 2x points, while for vice-captain, you get 1.5x points and picking the right players for these two slots while making your fantasy team could make all the difference. Here are the two suitable players for the slot. SRH vs KKR Dream11 Team Prediction IPL 2021: Tips to Pick Best Fantasy Playing XI for Sunrisers Hyderabad vs Kolkata Knight Riders, Indian Premier League Season 14 Match 3.

The Sunrisers Hyderabad has been one of the most consistent players in IPL history and would like to start IPL 2021 with a bang. Warner can attack bowlers from the outset, and his knack of staying at the crease for long makes him a great threat for the opposition. Notably, the dasher shares the Australian dressing room with KKR pace spearhead Pat Cummins and would be aware of his ability.

While there are many T20 stalwarts on both sides, none are in better form than Bhuvneshwar Kumar. The SRH pacer was in sensational form against England’s might batting line-up recently and would like to impress in the orange jersey as well. Moreover, KKR have an inexperienced top-order in Shubman Gill, Nitish Rana and Rahul Tripathi. Hence, Kumar would be licking his lips to take the new ball.

(The above story first appeared on LatestLY on Apr 10, 2021 08:15 PM IST. For more news and updates on politics, world, sports, entertainment and lifestyle, log on to our website latestly.com).