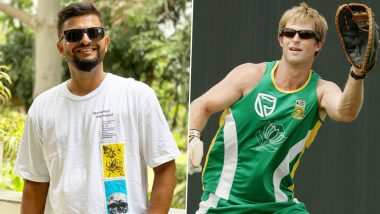 Arguably the best fielder to have stepped onto the cricket field, Jonty Rhodes turns 51 on Monday (July 27, 2020) and birthday wishes are pouring in for him from all around the world. On the occasion, veteran Indian batsman Suresh Raina also took to his official Instagram page and extended wishes for the former South African cricketer. The southpaw called Rhodes ‘the Flying Bird’ and thanked him for motivating him to become a good fielder. Just like Rhodes, Raina has also changed the course of many matches with his presence on field and needless to say, it was Rhodes who inspired the Chennai Super Kings star to become a live wire on the field.

“A very Happy Birthday to the Flying Bird @jontyrhodes8 thank you for making us believe that Fielding can make us win a match! More Power To You, Stay Blessed,” wrote Raina on the picture-sharing website while sharing a screenshot of from his video call with Rhodes. Have a look. Jonty Rhodes Birthday Special: Best Catches and Run Outs by One of the Greatest Fielders Ever.

A very Happy Birthday to the Flying Bird 😎@jontyrhodes8 thank you for making us believe that Fielding can make us win a match! More Power To You, Stay Blessed✨

In fact, Rhodes is also a ‘fan’ of Raina’s fielding prowess as the 2011-World Cup winner and he even hailed the southpaw as the ‘number one fielder’. "I have been a massive fan of Suresh Raina, for forever; ever since he started playing," Rhodes said in a video for ICC. "I know what the conditions of the fields are in India, and every time he practices, every time he dives, it's gonna be so much of heat. He doesn't even give a second hesitation of should I have dived or shouldn't have dived," he added.

"He goes for the ball which pretty much what my philosophy is, 'if you don't go, you'll never know' and he has done that. He has taken great catches in the slips and in the outfield and in the circle. I have loved watching Suresh Raina. He is my number one fielder," Rhodes had added further.

Meanwhile, Raina’s next assignment will get underway in the 2020 edition of the Indian Premier League (IPL). As per the schedule announced by IPL governing council chairman, the marquee T20 tournament will begin on September 19 while the finals will be played on November 8. However, due to the COVID-19 crisis in India, the tournament will take place in UAE.

(The above story first appeared on LatestLY on Jul 27, 2020 08:53 PM IST. For more news and updates on politics, world, sports, entertainment and lifestyle, log on to our website latestly.com).