Jonty Rhodes Birthday Special: Best Catches and Run Outs by One of the Greatest Fielders Ever (Watch Video) 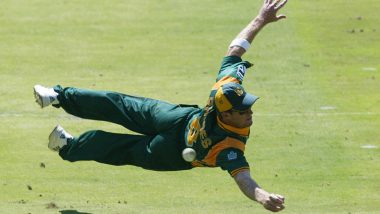 Jonty Rhodes is regarded as one of the greatest fielders of all-time. The former South African cricketer was known for his acrobatic fielding skills, and during his career, he has inflicted many memorable run-outs, like the Inzamam-ul-Haq run-out in the 1992 World Cup. Besides it, the former cricketer has taken many difficult catches as well. Jonty was born on July 27, 1969, in Pietermaritzburg, Natal. He made his debut for South Africa in the 1992 World Cup. And in the same year, in November, he played his first Test.  Virat Kohli is the Fittest Cricketer Currently, Says Jonty Rhodes.

Jonty last represented South Africa during the 2003 World Cup. He played 52 Tests and 245 One-Day Internationals (ODIs) for South Africa. In the longer format of the game, Jonty scored 2532 runs with three centuries and 17 half-centuries. In ODIs, he scored 5935 runs with two centuries and 33 half-centuries. While in Tests Jonty pouched 34 catches, in ODIs he took 105 catches. Besides it, he affected many run-outs single-handedly and with the help of other fielders.

Apart from being a cricketer, Jonty has also represented South Africa in hockey. Interestingly, in 1996 he was called up for trials for 1996 Olympic Games but was ruled out due to a hamstring injury.

(The above story first appeared on LatestLY on Jul 27, 2020 08:00 AM IST. For more news and updates on politics, world, sports, entertainment and lifestyle, log on to our website latestly.com).