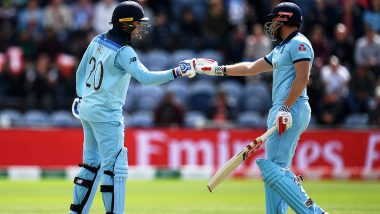 A close contest between the bat and the ball is witnessed when Australia and England lock horns in a cricket field and with a place in a World Cup final in stakes, the encounter gets even more exciting. On exact this day (July 11), the Ashes rivals faced each other in the semi-finals of ICC Cricket World Cup 2019. The Men in Yellow registered a 64-run victory when the two sides took on each other in the group stage of the tournament. However, Eoin Morgan and Co settled the scores in the semi-finals and knocked their arch-rivals out of the tournament. This Day That Year: New Zealand Knocks India Out of 2019 Cricket World Cup Despite Ravindra Jadeja and MS Dhoni’s Heroics.

As rain affected the game, the contest became a 49-over affair. Australia won the toss and opted to bat at the Edgbaston Stadium in Birmingham. The decision didn’t prove to be impeccable as in-form openers Aaron Finch and David Warner were dismissed with just 10 runs on the scorecard. Chris Woakes and Jofra Archer were breathing fire with the new ball. This Day That Year: England Defeat India by 31 Runs in ICC Cricket World Cup 2019 Despite MS Dhoni’s Unbeaten Knock.

However, former Aussie skipper Steve Smith rose to the occasion and made a brilliant fightback. He was well supported by wicket-keeper batsman Alex Carey who played some match-defining knocks in the tournament. The duo scored 103 runs for the fourth wicket. However, the batting side lost momentum again after Carey’s (46) departure. Smith’s reliance also came to an unfortunate end as he got run-out while batting at 85.

Courtesy some good hitting by Mitchell Starc in the end overs, Australia crawled to 223-10 in their allotted 49 overs. Chris Woakes and Adil Rashid got three wickets each while Archer claimed two wickets.

Well, the total never looked enough against the mighty and in-form batting line-up. Jason Roy and Jonny Bairstow went after the Aussie bowlers from the outset and made their intentions crystal clear. Mitchell Starc, who finished as the highest wicket-taker of the tournament looked completely ineffective as he was taken to cleaners.

Roy was the major contributor in the opening partnership while he was well supported by Bairstow. The latter eventually got out for 34 as the 124-run opening stand ended. Soon, Roy also was dismissed but not before scoring 85 off mere 65 balls. Joe Root (49) formed an alliance with skipper Eoin Morgan (45) and the duo made sure that no further twist got added in the tale.

The home side reached the target in just 32.1 with eight wickets in hand. England made a place in the World Cup final after 1992 while the defending champions were knocked out. Woakes received the Man of the Match award for his stellar spell.

(The above story first appeared on LatestLY on Jul 11, 2020 09:30 AM IST. For more news and updates on politics, world, sports, entertainment and lifestyle, log on to our website latestly.com).