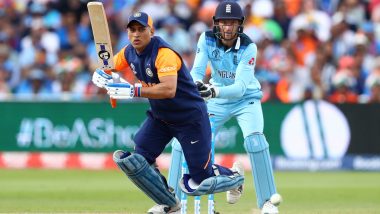 India enjoyed a sensational run in the league stage of ICC Cricket World Cup 2019 as they won seven out of their nine encounters and entered the knock-outs at the pinnacle of the points table. Their only loss in the round-robin stage came against host England which triggered many conspiracy theories of several Pakistan cricketers. As the game was played on exact this day (June 30), we’ll revisit the epic match. India almost secured their spot in the semi-finals ahead of the game while it was a do or die encounter for Eoin Morgan and Co. Also, the fate of Pakistan in the tournament also depended upon the game as only India’s victory could have helped them to make a place in the semi-finals. Mushtaq Ahmed, Abdul Razzaq Alleges India Lost to England Intentionally During ICC Cricket World Cup 2019 to Keep Pakistan at Bay.

Eoin Morgan won the toss and asked the Indians to bowl first. The decision proved to be impeccable as openers Jason Roy and Jonny Bairstow went after the bowlers from the outset and got their side off to a flier. The former departed after scoring a quick-fire 66 while Bairstow registered a thumping century. Ben Stokes, who batted at number five in that game, made optimum utilization of the start. The southpaw unleashed mayhem and scored 79 off mere 54 deliveries. MS Dhoni Lacked Intent During India vs England ICC Cricket World Cup 2019 Match, Claims Ben Stokes in his Book.

Mohammed Shami was the pick of the Indian bowlers as he claimed a five-wicket haul. However, he wasn’t able to restrict the scoring rate as England piled up 337/7. In reply, opener KL Rahul was dismissed even before opening his account. Nevertheless, Rohit Sharma continued his stellar form and scored his third century of the tournament. Skipper Virat Kohli also made a well-paced 66.

Playing his first match of the tournament, Rishabh Pant also contributed with 32 runs off 29 balls. The game looked perfectly poised as India need 106 in the last 10 overs with six wickets in hand. MS Dhoni and Hardik Pandya were on the crease. The latter departed in the 45th over after scoring 45 off 33. Surprisingly, Dhoni also couldn’t do much as he remained unbeaten at 42 off 31 balls as India could only reach 306-5 and lost the game by 31 runs. With India’s loss, Pakistan’s dream of going to the knockouts also got shattered.

A year later, Ben Stokes, in his book, wrote that he was stunned by Dhoni’s approach in the game as he showed no intent. However, his words were twisted by many Pakistan media which ignited many controversies. In fact, former Pakistan cricketers like Mushtaq Ahmed and Abdul Razzaq claimed that India deliberately lost the game in order to put the Men in Green out of the contest.

(The above story first appeared on LatestLY on Jun 30, 2020 03:47 PM IST. For more news and updates on politics, world, sports, entertainment and lifestyle, log on to our website latestly.com).