This Day That Year: New Zealand Knocks India Out of 2019 Cricket World Cup Despite Ravindra Jadeja and MS Dhoni’s Heroics

In the semi-final clash, the Men in Blue faced New Zealand who crawled to the semi-finals. India were the firm favourites to win the encounter. However, they failed to succumb to the pressure and faced a heart-breaking defeat. As the result of the match came this day only (July 10), we’ll revisit the epic match. 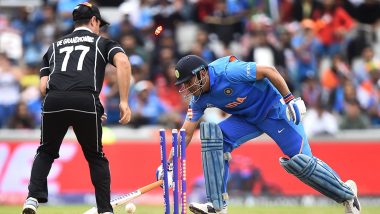 Indian enjoyed a sensational run in the league stage of ICC Cricket World Cup 2019 and were the frontrunners to lift the trophy too. With seven wins from nine games, Virat Kohli and Co finished the round-robin stage at the pinnacle of the team standings. In the semi-final clash, the Men in Blue faced New Zealand who crawled to the semi-finals. India were the firm favourites to win the encounter. However, they failed to succumb to the pressure and faced a heart-breaking defeat. As the result of the match came this day only (July 10), we’ll revisit the epic match. This Day That Year: England Defeat India by 31 Runs in ICC Cricket World Cup 2019 Despite MS Dhoni’s Unbeaten Knock.

The match was scheduled to take place on July 9 and it also went underway. However, rain interrupted the play and the other half of the game was played in the reserve day. Kiwi skipper Kane Williamson won the toss at Manchester and opted to bat. The decision didn’t look great at first as opener Martin Guptill fell early with just one run on the board. Henry Nicholls and captain Williamson tried to steady the ship. However, the run-rate was always on the lower side. MS Dhoni Lacked Intent During India vs England ICC Cricket World Cup 2019 Match, Claims Ben Stokes in his Book.

Nevertheless, Ross Taylor came into bat at number four and gave his side some momentum. Although, he also started slowly but shifted gears after assessing the conditions well. Soon, however, players had to leave the field as heavy rain was observed in the Manchester stadium. No further play was possible and the rest of the contest moved to the reserve day. New Zealand were 211/5 in 46.1 before the game was stopped and India were still on the driver’s seat.

As the game resumed on the reserve day, New Zealand were aiming to make maximum utilization of the final overs. However, they could only manage 239-8 courtesy of some brilliant death bowling.

Virat Kohli and Co were backed to chase the mediocre-looking target of 240 as their batting line-up was in fine form. Surprisingly, however, the Kiwi pacers ran through India’s top order as KL Rahul, Virat Kohli and Rohit were dismissed for just one run. Matt Henry and Trent Boult were breathing fire with the ball. Rishabh Pandya and Hardik Pandya showed some resistance. However, they both were dismissed at the personal score of 32 as India were reeling at 92/6.

Just when everyone thought, India’s defeat is inevitable. MS Dhoni and Ravindra Jadeja joined forces and brought their back in the game. The former Indian skipper was cautious while Jadeja went all guns blazing. The southpaw toiled the Kiwi bowlers and scored runs for fun. However, he was dismissed after scoring 77 off 59 balls and the Kiwis were back in the game.

Nonetheless, Dhoni was still on the crease as India’s hopes were still alive. The veteran, however, got run-out while batting at 50 by Martin Guptill and the game was sealed for the Kiwis. India eventually got bundled out for 221 runs and made a heart-breaking exit from the tournament. Also, MS Dhoni took a sabbatical from cricket after the disappointing loss and hasn’t played a professional game since then.

(The above story first appeared on LatestLY on Jul 10, 2020 08:51 AM IST. For more news and updates on politics, world, sports, entertainment and lifestyle, log on to our website latestly.com).