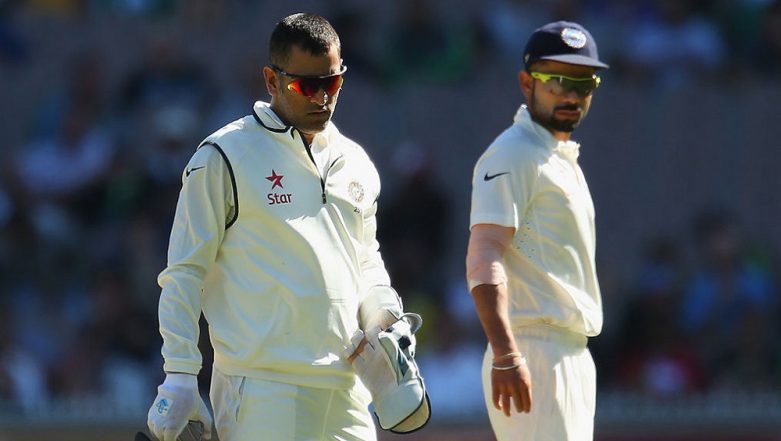 North Sound (Antigua), August 26: Virat Kohli added another feather to his illustrious cap as the India skipper equalled M.S. Dhoni's record of 27 Test wins after his team registered a massive 318-run record win over West Indies. The victory made Kohli-Dhoni jointly the most successful captains for India in Test cricket. While it took 60 matches for Dhoni to achieve the feat, Kohli took just 47 Tests. IND beat WI by 318 runs.

Dhoni had a win percentage of 45 as captain, after winning 27 matches, losing 18 and 15 draws. On the other hand, Kohli's win percentage is 55.31 -- the best among all other Indian captains in the format. In the 47 Tests under Kohli, India registered 27 wins, 10 losses and 10 draws. The run-machine also surpassed Saurav Ganguly with the most Test wins in overseas matches for India as captain. Kohli now has 12 away wins as captain in 26 matches, while Ganguly had 11 wins in 28 games.  India vs West Indies, First Test 2019: Jasprit Bumrah, Ajinkya Rahane Star as India Decimate West Indies by 318 Runs.

After Dhoni retired from the longest format of the game during the tour of Australia in 2014, Kohli took over the captaincy. In 2018, Kohli-led India to their first-ever series win in Australia as his team defeated the hosts 3-1 to seal a historic win in the Border-Gavaskar series Down Under. Speaking at the post-match presentation, Kohli, however, did not say much on his achievement and credited the team for it.