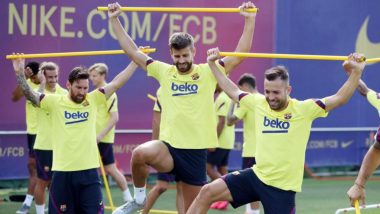 After defeating Napoli in the Round of 16 in aggregate of 4-2, Barcelona will next move to Portugal to play the round of eight against Bayern Munich. The match will take place at the Estádio Sport Lisboa e Benfica in Portugal. On one hand, where the Catalan team defeated Napoli, Bayern Munich ousted Chelsea on an aggregate of 7-1. All eyes will be on the two stalwarts of respective teams, i.e. Lionel Messi and Robert Lewandowski who will take on each other on August 15, 2020. Both the players have played a vital role for their respective teams to get through the quarter-finals. Now ahead of the match, the Catalan Giants have announced a 26-member squad for the upcoming game and this also included Martin Braithwaite. Lionel Messi Injury Latest Update: Barcelona Forward Visits Club’s Medical Facility to Treat Sprained Ankle Ahead of Bayern Munich UCL 2019–20 Clash.

Talking about Lionel Messi and Robert Lewandowski, the Argentine became the only player in the round of 16 to score 27 goals in the Champions League in the quarter-finals. Whereas, Lewandowski scored 53 goals in 34 Bundesliga appearances as opposed to Lionel Messi who had scored 31 goals and added 27 assists across all competitions. The German accounts for 54 per cent of his team goals whereas the six-time Ballon d’Or winner is responsible for 53 per cent of Barcelona's nets. Now let's have a look at the squad below:

The squad for the trip to Lisbon! pic.twitter.com/X1wNJXa5Fa

(The above story first appeared on LatestLY on Aug 12, 2020 06:09 PM IST. For more news and updates on politics, world, sports, entertainment and lifestyle, log on to our website latestly.com).