Where to Get Free Live Streaming Online of Barcelona vs Getafe, La Liga 2018-19 Football Match? 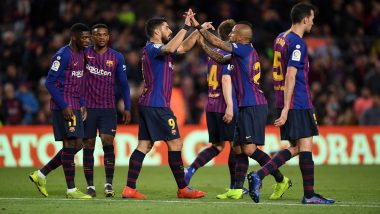 In the penultimate game of the season, Spanish champions Barcelona host Getafe at home where they will be eager to forget the hammering received at the hands of Liverpool. The Catalonians had their hearts broken at Anfield where they let slip a 3-0 first-leg advantage to capitulate under pressure once again in Europe. Their opponents Getafe have been the surprise package this season and are currently holding on to the fourth place with 58 points. It is imperative for them to get something out of the contest with Valencia breathing down their neck with 55 points. For details on Barcelona vs Getafe live streaming online, scroll below. Barcelona vs Getafe Live Football Score.

Luis Suarez and Ousmane Dembele are out of the contest as well as the remainder of the season following serious injuries. The Uruguayan striker underwent a knee surgery that may see him out of the Copa America in the summer too. Phillipe Coutinho could start the game on what should be his final home appearance for the Spanish champions after a torrid spell. Talisman Lionel Messi should feature after sitting out of their last league game while defence led by Gerard Pique and Clement Lenglet should be restored despite a game to forget against Liverpool.

Jaime Mata, Getafe joint top goalscorer is suspended for the tie which is a huge blow for the visitors. Their defence too will have to cope up without the presence of Bruno Gonzalez who sits out through suspension as well. Jorge Molina will have to step up in the absence of Mata to help Getafe create chances which could be far and few for them. David Soria in goal can expect a busy day at work considering the quality of the opposition.

Barcelona and Getafe lock horns against each other in the La Liga match on May 12, 2019, (Sunday). The top-ranked team is hosting the 4th-placed team in a match that will be held at Camp Nou. It will kick off at 10:00 PM IST.

How to Watch Live Telecast of  Barcelona vs Getafe, La Liga 2018-19 Football Match?

Sony Pictures Networks holds the broadcast rights of La Liga in India. So, the  Barcelona vs Getafe match will be live telecast on Sony Six and Sony Six HD channels.

Where to Get Free Live Streaming Online of  Barcelona vs Getafe, La Liga 2018-19 Football Match?

If you are unable to watch the match live on their TV sets, you can catch  Barcelona vs Getafe match online via live streaming on Sony Liv app as well as on La Liga's official Facebook page. You can also live football score updates on LatestLY here. Barcelona players will be angry after the events of the midweek and will come up with a perfect response against Getafe.

(The above story first appeared on LatestLY on May 12, 2019 08:00 PM IST. For more news and updates on politics, world, sports, entertainment and lifestyle, log on to our website latestly.com).