Interestingly, Neymar, who has played less than 20 matches in the year 2019, including both club and international team, found his name in the elite list of most-searched athlete of yea 2019 but Lionel Messi and Cristiano Ronaldo were left out. Alex Morgan, Megan Rapinoe and Ansu Fati were the other footballers in the top 10. 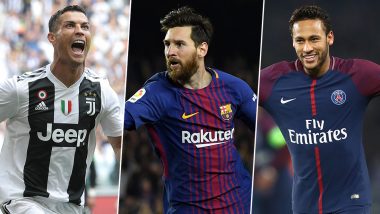 Neymar pipped Lionel Messi and Cristiano Ronaldo to become one of the top 10 searched athletes on Google. According to the recently released list of most searched athletes for the year 2019 on Google trends, Neymar was ranked second behind the United States NFL player Antonio Brown, while football superstars Messi and Ronaldo were omitted from the list. Messi, who became the first-ever footballer to win six Ballon d’Or awards, was not part of the top most-searched Athlete in Google year search 2019 as was Cristiano Ronaldo, who is one goal short of becoming first-ever European footballer to score 700 international goals and also won the Nations League with Portugal. Both the footballers are not just the most loved but also the most followed personalities/sportspersons in the world. Antonio Brown, Neymar, Bryce Harper Top the Most-Searched Athletes in Google Year in Search 2019 Global List.

Interestingly, Neymar, who has played less than 20 matches in the year 2019, including both club and international team, found his name in the elite list of most-searched athlete of yea 2019 but Messi and Ronaldo were left out. Alex Morgan, Megan Rapinoe and Ansu Fati were the other footballers in the top 10. While the inclusion of Rapinoe, who clinched her maiden Ballon d’Or award this year, and the United States Women’s Football teammate Alex Morgan was undoubtedly understandable, Ansu Fati and Neymar were certainly surprising inclusions. Cricket World Cup, Pro Kabaddi League, Wimbledon Top the Most-Searched Sports Events in Google Year in Search 2019 India List.

Most Searched Athletes in 2019

But if take a look at the complete search results on Google Trends for the year 2019, Juventus talisman Cristiano Ronaldo appears as the most-searched footballer, while Lionel Messi comes second and Neymar is pushed to third. Ronaldo throughout the year was the most searched sportsperson and personality on global trends throughout 2019. Meanwhile, Neymar appears as the most searched athlete in the month of June. June 2-8 shows Neymar as the most googled athlete. It is important to know that the summer transfer window was ongoing during the month of June and ran till August 31.

Most Googled Sportsperson in Year 2019

As Neymar was heavily speculated to be making a move back to Spain and was rumoured to be joining either of Real Madrid and Barcelona, football frenzy fans kept a tab on his movements and every news update on him, which made him the most searched athlete of that period. That search trend also helped him in ranking second in the Google Trend list of the most-searched athlete in the year 2019, pipping both Messi and Ronaldo to the position.

(The above story first appeared on LatestLY on Dec 11, 2019 05:31 PM IST. For more news and updates on politics, world, sports, entertainment and lifestyle, log on to our website latestly.com).