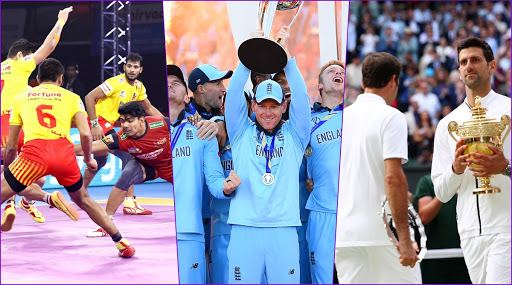 As the year comes to a close, Google released its ‘Year in 2019’ list, which shows the most searched topics in the various categories from across the world. In the top 10 list published by Google, as far as the search results in India are concerned, the Top 10 listicle includes categories like Movies, Personalities, Songs, Sports Events, News and many more. Here is the listing of the most-searched sports events in India throughout the calendar year of 2019. The searches include different sports like Cricket, Tennis, American Football and Soccer. Cricket is the most popular sport in India, so unsurprisingly Cricket World Cup tops the list of the most-searched sports event in India. Antonio Brown, Neymar, Bryce Harper Top the Most-Searched Athletes in Google Year in Search 2019 Global List.

The biggest revelation made in the list is despite all its fame, English Premier League does make it into the Top 10 of the most-searched sports events. Pro Kabaddi which was launched in 2014 is second in the list and is followed by Wimbledon on third. The other cricketing event which makes it into the top 10 is ‘The Ashes’ and it occupies the eight spot. Copa America which was played in Brazil earlier this year appears fourth on the list while Australian open takes the fifth spot.

The other Tennis events in the list are French Open and US Open which take the sixth and ninth spot respectively. Probably the biggest surprise in the list is Super Bowl, as the annual championship of NFL takes the seventh spot. The list is completed by India’s premier footballing competition ‘Indian Super League’ on the tenth spot.