Ronaldo has guided Juventus to two Serie A titles and scored 75 goals in just 98 appearances in three seasons at the club. But with Juventus taking a hit to their finances due to the pandemic, the club want to sell Ronaldo and cut down their huge wage list. Ronaldo earns 28m Euros in annual salary and is the highest-paid footballer at the club. 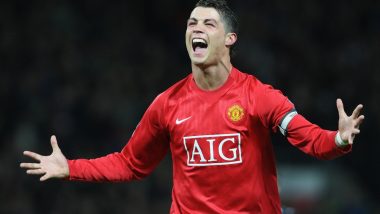 Cristiano Ronaldo could make a sensational return to Manchester United next summer with the club’s jersey sponsor Chevrolet willing to finance the transfer deal. Ronaldo, who won the first of his five Ballon d’Or trophies while at United, spent six fruitful seasons at Old Trafford and was a crowd favourite before departing for Real Madrid in 2009. Ronaldo enjoyed another stellar campaign at Real Madrid and won numerous trophies with the Los Blancos before moving to Juventus in 2018. He has been in fine form with the Serie A giants but Juventus are reportedly willing to offload the Portuguese this summer. Cristiano Ronaldo Looks To End Barcelona Duck As Juventus Face Spanish Giants in UCL 2020-21 Group G Clash.

Ronaldo has already guided Juventus to two Serie A titles and scored 75 goals in just 98 appearances in three seasons at the club. But with Juventus taking a hit to their finances due to the coronavirus pandemic, the club want to sell Ronaldo and cut down their huge wage list. Ronaldo earns an approx. 28 million Euros in annual salary and is the highest-paid footballer at the club. He has been sensational this season and has scored nine goals in his last 10 appearances for Juventus. Manchester United Transfer News Update: Paul Pogba Is Unhappy and Wants to Leave, Says Agent Mino Raiola.

But the club believe they can’t afford him next season due to huge loss the club have incurred last season due to COVID-19. Juventus can save a total 28 million Euros per season in salaries just by selling Ronaldo in addition to transfer fee they can earn by selling Ronaldo. Juventus signed Ronaldo for a club-record 100 million Euros from Real Madrid in 2018 and want to sell him for a similar fee.

He has been already linked with a return to Manchester United next summer and reports now suggest United’s chief jersey sponsor Chevrolet are willing to shell heavy cash to bring the Portuguese superstar back to Old Trafford. Ronaldo, however, won’t come cheap. The 35-year-old has a weekly wage of 500,000 pounds a week.

According to Auto Esporte, the transfer will be worth from a commercial point of view and a shrewd business move. The American automobile company have already seen the positive impact Ronaldo had on Juventus shirt sponsor Jeep’s sales since joining the club three seasons ago. Juventus’ shares have also gone up by 30 per cent on the Milan stock exchange just a week after Ronaldo made the move to Turin.

Ronaldo, meanwhile, will hope he can lead Juventus to a win over rivals Barcelona in their final Group G match in the UEFA Champions League. Both clubs have already confirmed their place in the UCL knockout stage but Juventus will hope to end the group stage with a win and also avenge their 0-2 defeat to Barcelona at home in the reverse fixture two months ago

(The above story first appeared on LatestLY on Dec 08, 2020 04:10 PM IST. For more news and updates on politics, world, sports, entertainment and lifestyle, log on to our website latestly.com).