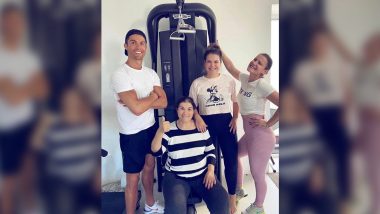 Cristiano Ronaldo is not just one of the best footballers of all-time but is also the highest-paid footballer. A recent Forbes 2020 list of world’s highest-paid athletes pitted Ronaldo second behind tennis great Roger Federer. The Portuguese has been among the top two highest-earning athletes for three years running. But this comfort and luxurious life wasn’t always there for the Juventus footballer. Ronaldo and his four siblings grew up in a one-room house and struggled to meet ends when they were young. Ronaldo’s sister Katia Aveiro recently shared a picture of their old house and opened up on the family’s struggles when they were growing up. Cristiano Ronaldo Could Reach This New Milestone When Juventus Host Lecce in Serie A 2019–20.

Katie, who now lives in Brazil after marrying a businessman, shared a picture of the house on her Instagram page and also spoke on their upbringing in Maderia where she, Ronaldo and their two siblings grew up. The 43-year-old and mother of a daughter wrote: “I was born in an old house and my bed was held up by bricks.” She also revealed how one day she was bitten by a rat while sleeping in the old house, which has now been demolished. Cristiano Ronaldo Enjoys Beautiful Sunset in Turin Ahead of Juventus’ Serie A Clash With Lecce (See Post).

“I was bitten in the face by a rat when I was still a baby and I’m not ashamed to say it. Thank God my mother arrived in time, otherwise, I’d be uglier than I am today,” she wrote in the Instagram post. “I grew up in a poor neighbourhood and from an early age I learned to appreciate what little I had.”

Ronaldo’s sister also spoke of the influence of their mother on each of their lives. “When I was little my mum taught me to share what we had between us. The ability to help someone has nothing to do with their possessions. We should and can help someone whatever their social condition.”

Ronaldo too seems to have incorporated some of those values in himself as was seen during the Coronavirus-enforced lockdown in Portugal. Ronaldo, who was in Madeira with his family, donated a huge sum to his childhood club and also asked his national teammates to donate half of their Euro 2020 qualification bonus to help those in plight.

Meanwhile, Ronaldo will be hoping his club can secure a fourth-straight league win when they host relegation-battling Lecce in Serie A 2019-20 on Friday. Juventus are four points clear at the top of the league points table and can further widen the gap with a win.

(The above story first appeared on LatestLY on Jun 26, 2020 11:41 PM IST. For more news and updates on politics, world, sports, entertainment and lifestyle, log on to our website latestly.com).