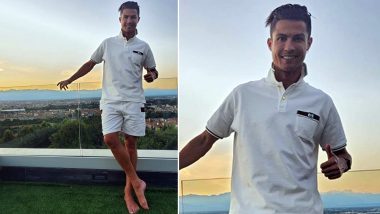 Cristiano Ronaldo netted his 22nd league goal against Bologna in Juventus’ previous Serie A game. This surely lifted some pressure off his shoulders as the Portuguese had endured a tough time since football’s restart from coronavirus suspension as he had gone without scoring in four successive games before the goal. Now ahead of the next game, the 35-year-old is taking some rest to recharge his batteries. Cristiano Ronaldo and Georgina Rodriguez Spend Quality Time Together, CR7's Girlfriend Captions The Pic, ‘The Only Thing I Like More Than You is Us’.

On Thursday, Cristiano Ronaldo shared a picture on his social media in which the five-time Ballon d’Or can be seen letting his hair down and enjoying a beautiful sunset in Turin ahead of the game against Lecce on Friday. ‘Enjoying this beautiful sunset #torino’ the Juventus superstar captioned his post. Cristiano Ronaldo Goes Bike-Riding With Girlfriend Georgina Rodriguez & Kids (See Pic).

The 35-year-old recently became the highest-scoring Portuguese player in Serie A as he registered his 43rd goal in the competition to overtake Rui Costa’s record. Costa spent 12 years in the Italian league while the five-time Ballon d’Or winner needed just less than two seasons to surpass the long-standing record.

Cristiano Ronaldo will be back in action on Friday against Lecce and will be looking to continue his goal-scoring form. Juventus are four points ahead of Lazio but need to be on their toes as even a small slip-up can allow the Rome-based club back into the title race.

(The above story first appeared on LatestLY on Jun 26, 2020 11:27 AM IST. For more news and updates on politics, world, sports, entertainment and lifestyle, log on to our website latestly.com).