Happy Birthday Sunil Chhetri: A Look At Top Five Records By Indian Football Captain As He Turns A Year Older 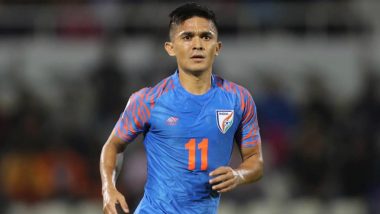 Born on August 3, 1984, Sunil Chhetri is one name from the Indian football fraternity who is going strong and has been blazing guns even after completing one and a half-decade in the sport. He is popularly known as ‘Captain Fantastic’ for having scored the second-highest number of goals in international matches among active male players after Cristiano Ronaldo. The Indian captain has even surpassed Barcelona captain Lionel Messi when it comes to scoring international goals. Sunil Chhetri Becomes Second-Highest International Goal-Scorer After Cristiano Ronaldo; Beats Lionel Messi.

From scoring pin-point headers to scoring some most stunning goals, Chhetri has risen to prominence is surely a key man for the Indian football side. The Indian captain has given many moments for the Indians to cheer for and the fans still relish all of them. As the Indian football captain turns a year older, let’s have a look at top five records of the captain.

That's all we have in this article if you think that we have missed out on a few more important records, feel free to weigh in below. Coming back to the birthday of the Indian football captain, we wish him a Very Happy Birthday.

(The above story first appeared on LatestLY on Aug 03, 2020 09:10 AM IST. For more news and updates on politics, world, sports, entertainment and lifestyle, log on to our website latestly.com).