Juventus will look to seal their place in UEFA Champions League knockouts when they host Ferencvaros in their fourth match of Group G on Tuesday. Juventus are currently second in the group and a win will secure their place in the UCL round of 16 while also keeping them in contention to top the group ahead of Barcelona. 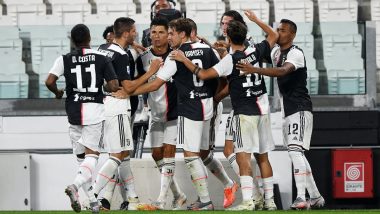 Reinvigorated by Cristiano Ronaldo’s return, Juventus will seek to seal their place UEFA Champions League 2020-21 round of 16 when they host Ferencvaros in their fourth Group G match of the UCL. Andrea Pirlo’s side are second in Group G three points behind Barcelona and can secure the knockouts berth with a home win against Ferencvaros on Tuesday. A win will also keep them alive for topping Group G which Barcelona currently lead by three points. Ferencvaros are at the bottom of the group with one point and are winless after three games. Meanwhile, fans searching for how and where to watch the Juventus vs Ferencvaros UCL Group G match should scroll down for all details. Cristiano Ronaldo Shares Picture With Paulo Dybala and Others From Juventus Training Ahead of UEFA Champions League Match Against Ferencvaros (See Pic).

Ronaldo has continued from where he had left after returning to action post his recovery from COVID-19. The Portuguese talisman has scored five goals in three matches in the Serie A after his return but went without a goal when Juventus faced Ferencvaros in the reverse fixture last month. He is yet to break the drought in the UCL this season and will hope to open his scoring against the bottom-placed team in the group.

Juventus vs Ferencvaros UEFA Champions League 2020-21 Group G match will be played on November 25, 2020 (Tuesday midnight). The match will be held at the Allianz Stadium in Turin and it is scheduled to start at 07:30 pm IST (Indian Standard Time).

Fans in India can enjoy the live telecast of Juventus vs Ferencvaros Group G match on Sony Sports channels. Sony Sports Network is the official broadcaster for UEFA Champions League 2020-21 in India. Fans need to tune in to Sony Ten SD and HD channels to catch the live-action of the Group G match. Those searching for an online option can follow the match live on SonyLiv, the OTT of Sony Network. SonyLiv will be live streaming the match online for its fans in India.

(The above story first appeared on LatestLY on Nov 25, 2020 12:01 AM IST. For more news and updates on politics, world, sports, entertainment and lifestyle, log on to our website latestly.com).