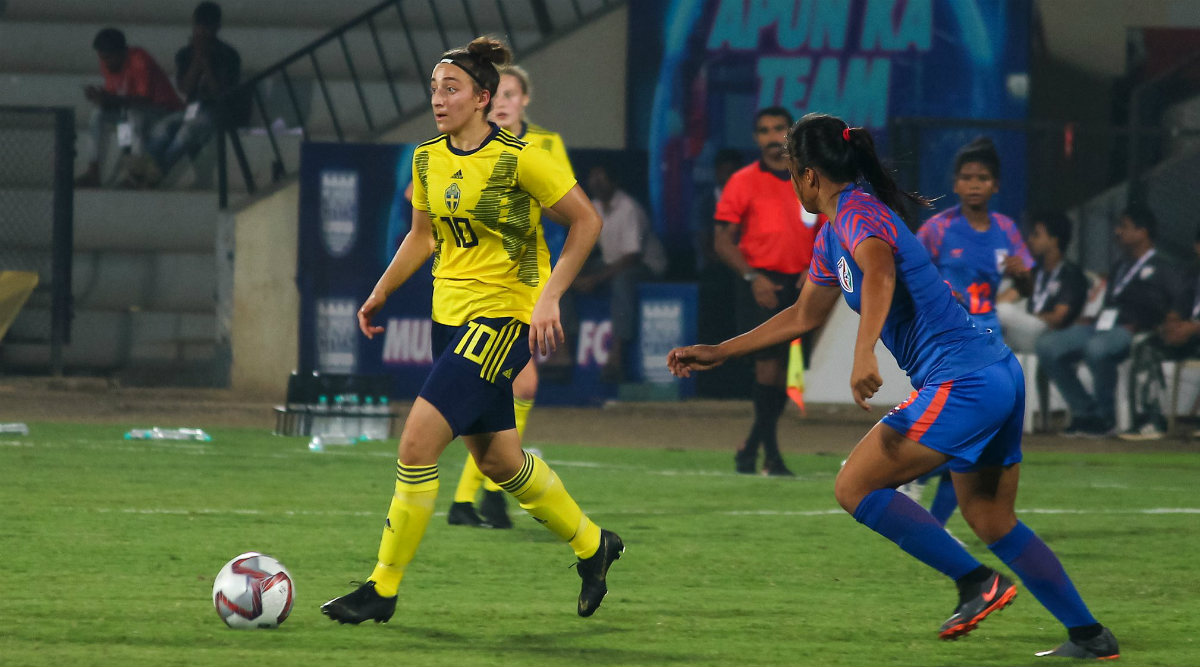 Mumbai, December 14: India U17 women, playing their first game under newly appointed head coach Thomas Dennerby, suffered a 0-3 defeat against Sweden in the opening match of the football tournament but not before putting up a brave fight and impressing many.

In the match that took place on Friday evening at the Mumbai Football Arena, Sweden scored twice in the first half and once in the second half to seal the game.

The visitors took an early lead four minutes into the game, with Matilda Vinberg converting a spot-kick.

India came close to equalising only a few minutes later, creating two chances in consecutive minutes. Lynda Kom charged down the left and took a shot from the edge of the box that was saved by the Swedish custodian in the 11th minute.

Moments later, Sunita Munda beat her marker down the right flank and put in a cross towards Sumati Kumari. However, the Swedish defender came in with a last-minute challenge and the defence cleared the ball away.

The game became a midfield battle as both sides looked to pass their way past the opposition. India goalkeeper Manju Ganjhu showed great alertness on two occasions, rushing outside the penalty area to clear the ball away.

In the 21st minute, Lynda broke through once again and registered a powerful effort that drew a good save from the Sweden keeper.

Manju made another save in the 24th minute but a minute later, Sweden doubled their advantage through Ida Weidenberg. The forward ran down the left flank with the ball and slotted it into the far corner.

The last chance of the first half fell to Sweden's Monica Bah, who was played in on goal in the 32nd minute. However, she was denied by Manju, who tipped the ball over the crossbar with a fingertip save.

The second half began just as the first ended, with both teams battling it out. India coach Thomas Dennerby rang in the changes as Jyoti Kumari, Purnima Linda, Sai Sankhe, Anisha Baxla, Aveka Singh and Mariyammal came on off the bench over the course of the second half.

The Indian defense, marshalled by skipper Shilky Devi, repelled the Swedish attack as Sumati Kumari posed danger for the opposition on a number of occasions, breaking past the backline. In the 70th minute, she charged into the box down the left but her cut-back towards Sai was not finished.

Five minutes later, she slipped through on goal yet again but her shot from inside the penalty area went narrowly wide. As the match drew to a close, Sweden scored in stoppage time through Monica Bah to make it three as they picked up the three points.