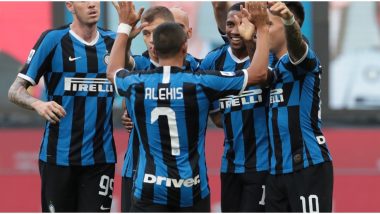 Inter Milan vs Bayer Leverkusen Live Streaming Online: Inter Milan did well in the Serie A, finishing second in the points table under the management of Antonio Conte. The Italian gaffer must have been please with the way his side finished just a point behind champions Juventus. The Europa League represents an ideal opportunity for Inter to win a title this season, but Bayer Leverkusen stands in their way. The two sides clash in Dusseldorf tonight in what promises to be an action-packed game. Bayer Leverkusen have missed out on automatic qualification for the Champions League, and thus the game is of utmost importance to them. Inter Milan Will Have to Give Everything, Says Manager Antonio Conte Ahead of Europa League 2019-20 Quarter-Final.

Matias Vecino and Stefano Sensi remain sidelined for Inter Milan due to fitness issues and apart from the duo, the rest are eligible for selection. Former Manchester United strikers Romelu Lukaku and Alexis Sanchez should feature in the forward line for the Nerazzurri with Christian Eriksen pulling strings in midfield. Wingbacks Ashley Young and Antonio Candreva play a crucial role in the 3-5-2 system adopted by Antonio Conte. Bayer Leverkusen will do well to stop them from venturing forward. Marcelo Brozovic is a floater in midfield and if needed, can link up with Christian Eriksen in the forward areas.

Charles Aranguiz, a key man in the Bayer Leverkusen midfield, misses out due to suspension while Paulinho is injured. Kerem Demirbay and Nadiem Amiri make a comeback in the squad with the former making it to the starting eleven. Kai Havertz, one of Europe’s newest superstar, will start inj a central role with Kevin Volland as the lone striker.

Sony Sports are the official broadcasters of UEL in India. So fans can tune into Sony Ten channels to catch the live-action of Inter Milan vs Bayer Leverkusen on TV.

UEL 2019-20 will be streamed live on OTT platform such as SonyLIV. So fans can tune into SonyLiv App and website to get the live streaming of Inter Milan vs Bayer Leverkusen. Jio Users can also watch the game live on JioTV App. Inter Milan have a brilliant attack which can play some exquisite football. Expect the likes of Alexis Sanchez and Romelu Lukaku to be on the scoresheet against Leverkusen as the Italians march on.

(The above story first appeared on LatestLY on Aug 10, 2020 05:20 PM IST. For more news and updates on politics, world, sports, entertainment and lifestyle, log on to our website latestly.com).